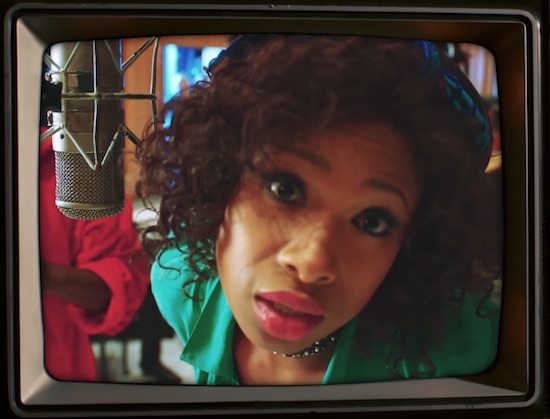 Jennifer Hudson has snagged another acting role in the upcoming Netflix movie, Sandy Wexler, but before its April 14th release, we get a music video for one of the songs from the film "MR. DJ." In visual, we find JHud, Kenny "Babyface" Edmonds and Ma$e in the studio, while Sandy Wexler (played by Adam Sandler) oversees the session in the '90s-inspired video. Jennifer uses her powerhouse vocals over the pop track to ask "MR. DJ" to play her favorite song as Adam looks on, enamored. The video is colorful and vibrant, featuring scenes from the movie and pieces of the song's lyrics layered throughout in neon writing. Once Ma$e joins her in the booth to drop his verse, we watch the duo have fun and get close while Adam gets jealous.

The premise of Sandy Wexler, set in Los Angeles in the 1990s, is that the quirky manager falls in love with his newest client, Courtney Clarke, played by Jennifer. Based on this music video alone, we look forward to watching the shenanigans unfold. Sandy Wexler features cameo appearances from Terry Crews, Arsenio Hall, Chris Rock, Darius Rucker and more.

Aside from being a movie star, Jennifer's been busy across the pond playing coach for budding stars on The Voice UK. She's also gearing up for the release of her new album on new label home Epic Records. She released her latest single "Remember Me" last month, and it looks like the singer/actor has a lot more brewing for the remainder of 2017. Watch the fun throwback video for "MR. DJ" and look out for Sandy Wexler on Netflix on April 14th.