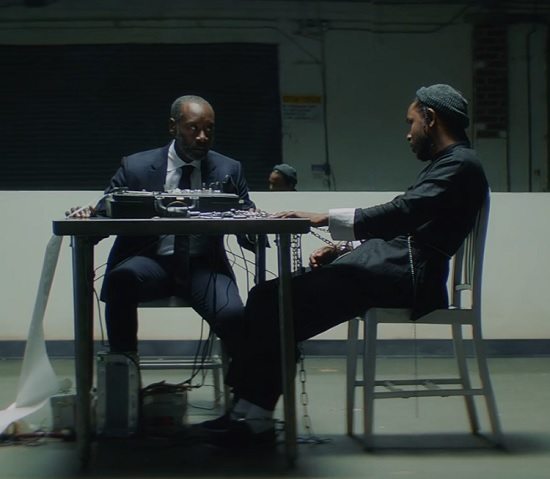 All hail King Kendrick Lamar. His latest album, DAMN., is all anyone can talk about right now in music and his killer performance at Coachella over the weekend showed why he's the current ruler of the hip-hop game. But just in case there was any doubt that Kendrick deserves the crown, the rapper introduces his alter ego Kung Fu Kenny in the brand new clip for DAMN. banger "DNA."

In the clip, Kendrick taps esteemed actor Don Cheadle to play a detective holding him for questioning. However, while Cheadle thinks he's completely in control of the situation, the tables are flipped as soon as he sits down to administer a polygraph test. Pressing the button, he's immediately possessed by the spirit of Kendrick as the booming bass of "DNA." rolls out. Soon, he and K.Dot are rapping the song's lyrics back and to each other, flipping chairs and dropping bars in the process. K. Dot is freed from the handcuffs before the beat flips (that's Rick James' voice asking for some "ganja," by the way) and the clip hews closer to your standard music video. We see examples of Kendrick's lyrics interspersed between images of him on the streets with his boys and a lowrider full of ladies tearing up the streets.

Directed by frequent collaborator Nabil (with co-directing credits going to "The Little Homies," of course), the clip for "DNA." is most definitely an enthralling vision. Based on this and "HUMBLE.," we can't wait to see the other visuals that DAMN. will spawn. While you think about the possibilities, peep "DNA." below.