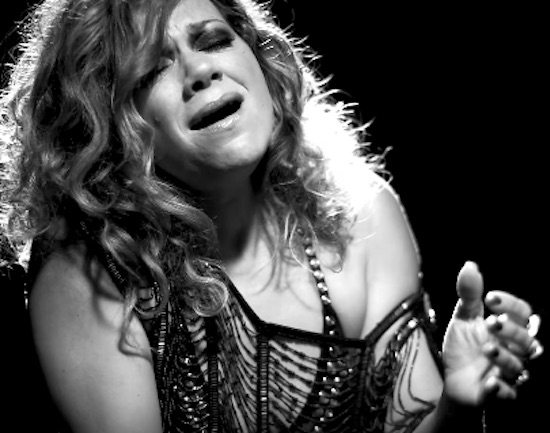 It's been a couple of years since we last heard from singer Nikka Costa. But now the vocal powerhouse is breaking fans off with two treats in the form of a video for her updated take on Prince's "Nothing Compares 2 U" and a release date for her upcoming project, Nikka & Strings, Underneath and in Between, set to drop June 2nd on Metropolis Recordings.

In the simple black and white video, we see a purposely-disheveled Costa walking down the street and singing in various locations, including a recording studio. The only other people who are featured in the passionate clip are her backing band, including a string quartet that provides the album's foundation. The vocal powerhouse provides a performance that is both raw and mighty. The strings provide a striking counterpoint, delicate and vulnerable where Costa is gritty and pained.

"Nothing Compares 2 U" is the first single taken from the 11-track album, which was recorded in a single day at Los Angeles' Henson Studios. "We started playing it before Prince passed away," Costa explained about the song's recording. "I was really excited for him to hear it, but unfortunately he passed before we recorded it - and then when recording day came, all of that emotion was attached to it, so it took it to another level."

As mentioned earlier, Nikka & Strings, Underneath and in Between marks the singer's highly-anticipated return after taking an extended hiatus to focus on raising her two children with her husband, Justin Stanley, who also produced the album. Take the striking visuals for a spin below and peep the tracklist, too. The album is available for preorder on both Amazon and iTunes.

Nikka Costa Nikka & Strings, Underneath and in Between tracklist:

TAGS:  Justin Stanley, nikka costa", prince
Previous: ‘All Eyez’ Are On Tupac In Latest Biopic Film Trailer Next: SoulBouncers: Win Tickets To Opening Night Of The Art Of Cool Festival 2017!