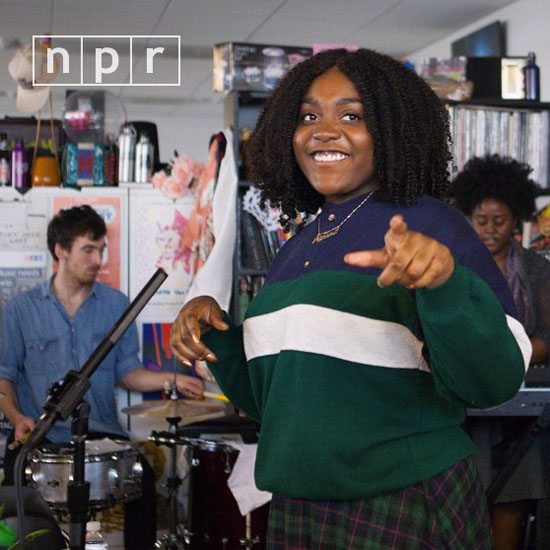 Chicago native Noname recently swung by the NPR headquarters to perform several tracks from her 2016 mixtape Telefone as part of the intimate Tiny Desk Concert series. Arguably one of the most underrated lyricists -- male or female -- to come out of the Chi, she sets a tone fit for a poetry slam with her signature sound that walks the line between spoken word and rap. It’s all very unique and very, very hip-hop.

Backed by a solid four-piece band, she ran through a setlist that included “Diddy Bop,” a tune reminiscent of good times and mistakes made during childhood, as well as “Yesterday,” a somber track about the death of Noname’s grandmother. The performance also included a medley of “Reality Check,” “Casket Pretty” and “Bye, Bye, Baby.” The subject matter of all three are pretty heavy, yet she delivered it all with a beaming smile on her face. This, and her impeccable knack for storytelling, is all part of her allure. Though her lyrics tackle familiar yet sometimes desolate and melancholy topics, she somehow presents it all in a lighthearted way over vibrant and flawless production.

The masses caught their first glimpse of Noname when she was featured on her long-time friend Chance the Rapper‘s 2013 mixtape Acid Rap and then again on his brilliant, GRAMMY-winning Coloring Book last year. Since then, the rising artist born Fatimah Warner has certainly made a name for herself with a project and performance that sounds like nothing else out.

Watch Noname’s NPR Tiny Desk Concert series performance in its entirety below. For those who are late to the Noname party, Telefone is available for purchase on iTunes and can be found on all streaming services, including Spotify and SoundCloud.