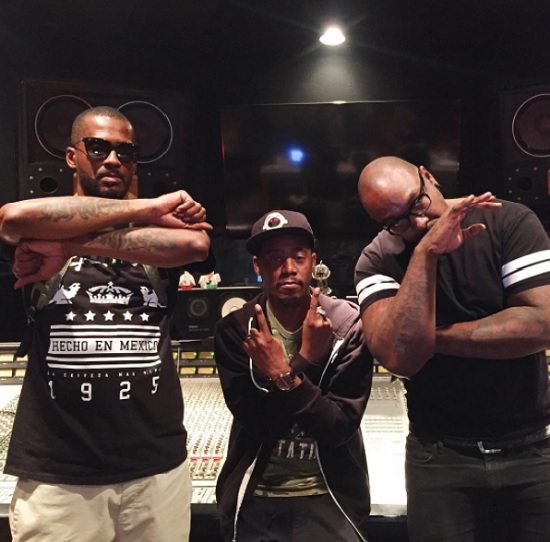 For fans of Organized Noize, the famed masterminds behind some of OutKast, Goodie Mob and TLC's biggest hits, the release of their 2016 documentary The Art of Organized Noize had a lot of us dusting off our faves while wondering if we'd ever get new music from the trio consisting of Rico Wade, Ray Murray and Sleepy Brown. A little over a year later, and we have to wonder no more. The good news comes in the form of a smoking hot single and a new self-titled EP due out next month.

The guys took to social media to announce the new single, "Kush," featuring Joi and 2 Chainz. At first glance, the matchup may seem a bit off-kilter. However, from the opening seconds, it becomes obvious that these guys are considered musical visionaries for a reason. Joi's vocals are dipped in raw sensuality as she instructs her lover to "Kiss me like you mean it then pass the kush." She makes her intentions explicitly clear in this NSFW ode to sticky green. In true Organized Noize form, the song is heavy on the bass and funk. A brief tempo change provides the backdrop as Joi waxes poetic about her favorite flowers (hint: it's definitely not roses). For his part, 2 Chainz rides the slinky beat with ease as he joins in on the high grade love fest.

"Kush" is the first single taken from the guys' upcoming Organized Noize EP, due out May 5th. The seven-track project marks the first output from the group in quite some time and is set to feature appearances by Big Boi, CeeLo Green, Big Rube, Scar and Jimmy Brown. The EP is available for pre-order on Amazon, iTunes and Google Play. Pre-orders come with an immediate download of "Kush," so if you're liking what you're hearing, you definitely may want to reserve your copy in advance.