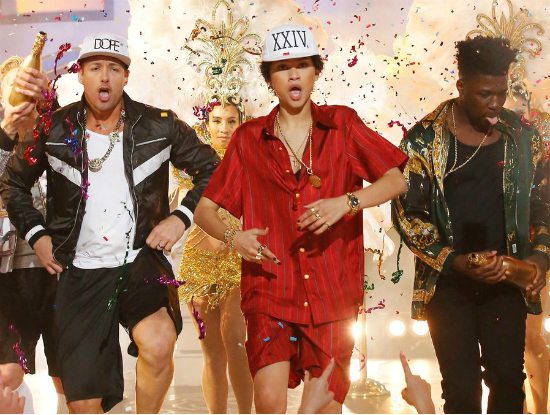 In probably one of the most epic Lip Sync Battle episodes ever, actress/model/singer Zendaya got into serious character while portraying both Erykah Badu and Bruno Mars. During a Spider-Man edition of Lip Sync Battle airing before the MTV Movie & TV Awards, Zendaya went up against Spider-Man: Homecoming co-star and leading man Tom Holland. While Tom kept it cute, performing  Nelly’s "Ride Wit Me" and Rihanna's "Umbrella," Zendaya took it all the way, getting into full character for her lip sync renditions.

For her first performance, she donned a signature oversized head wrap and instantly transformed into Ms. Badu. She took her time to reprimand "Tyrone" in the classic ditty, adding her spunk and extra sass as she popped her hips throughout the performance. Auntie Erykah would be proud. After her effortless performance of "Tyrone," Zendaya switched gears to bring a little magic to the mix as Mr. Mars. With her own Hooligans in tow, Zendaya stepped off a fake plane, looking identical to Bruno for her "24K Magic" performance. Rocking a silk shirt and "XXIV" hat, Zendaya mimicked Bruno's choreography perfectly and even made it rain on Tom mid-performance.

Lip Sync Battle, with hosts LL Cool J and Chrissy Teigen, has showcased the finest of lip-syncers, including Common, Jimmy Fallon, Channing Tatum, Taye Diggs, Ne-Yo and more. Season 3 of the hilarious show began April 20th and just got renewed for a new season in January 2018 as part of the new Paramount Network. The Season 4 kickoff is slated to be a huge star-studded event taking place live on the Paramount lot, so we'll wait to hear more about the line-up in the coming months. And in case you were wondering, Spider-Man: Homecoming is due in theaters July 7th. Until then, watch Zendaya body her performances of "Tyrone" and "24K Magic" for yourself on the following page.