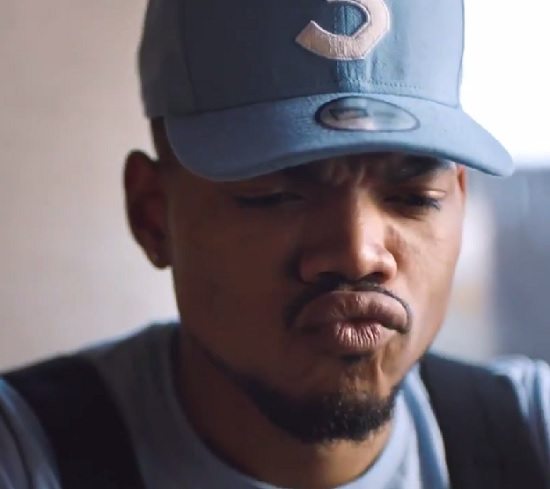 Chance the Rapper continues to capitalize on his popularity and is using his influence to assist yet another mega brand. Following a Kit Kat endorsement and a $500,000 exclusive deal with Apple Music, the Chicago MC has joined Twitter for their new #SeeEverySide television campaign. In the commercial, we see Chance taking a quick break from soundcheck to tweet fans, asking if they have any requests for his concert. True to form, tons of excited fans quickly respond with song requests and comments, some good and some with a hint of side-eye. Also in true Twitter form, it doesn’t take long for the trolls to arrive. This time, however, the petty provocation doesn’t come from some lonely soul living in their parent’s basement. Instead, it’s legendary singer/songwriter/guitarist David Crosby. In response to Chance’s request, the Crosby, Stills & Nash star tweets, “any song with real instruments.” He follows that shade by adding, “I could up your game” and a winking emoji. Rather than clap back at the classic folk-rock artist, Chance simply chuckles and proceeds to ride his bike onto the stage to perform.

The goal of the #SeeEverySide campaign is to showcase Twitter’s ability connect users with everything from music to sports to news. According to Twitter CMO Leslie Berland, the company feels Chance the Rapper is vital to the campaign. “Chance’s authentic use of Twitter is powerful as is his fandom and the conversation that surrounds him,” she says. “We spotlight the voices of fans, press, influencers and artists — every side of the conversation — at the speed of Twitter.” The company’s VP of Global Brand Strategy, Joel Lunenfeld, says that “music is one of the platform's top interests among its users, and who better to exemplify the narrative than an artist.” He says Chance was chosen because his use of Twitter “really captures the essence of how an artist can connect with people on Twitter.” Smart move.

The commercial was initially released via Twitter and other digital mediums, and is set to air over the next several weeks during award shows such as the ESPYs and BET Awards, as well as late-night talk shows. Have a few laughs and watch the full ad below.