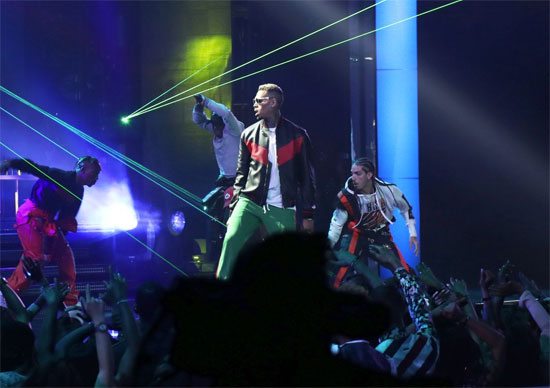 The BET Awards 17 weren't without incident, with a confrontation of some sort between performers Chris Brown and Migos happening after the show aired. No one was hurt and no floral blouses were torn during the incident, but the situation managed to get Breezy's name in the headlines yet again for all the wrong reasons.

Earlier in the evening, it was business as usual for Brown who returned to the BET Awards stage to clock in another performance with lots of nimble dancing. It's always debatable whether he's really singing live or doing his best lip-syncing to a track when he performs, but there's no denying that Chris Brown can get down with the get down with some fancy footwork. He definitely brought it with live renditions of his songs "Privacy" and "Party."

For "Privacy," Chris left most of the heavy lifting to female dancers who joined him on stage and exhibited their flexibility and assets in flesh tone bodysuits while he stood center stage.  The song switch to "Party" got the proverbial party started and was Breezy's cue to get loose. He was joined by even more dancers of both sexes at this point who were dressed in street clothes and dabbed, twerked and danced for their lives behind Brown who did the same. Bright lasers and spotlights cut through the darkness to add to the visual spectacle. Although featured artist Usher wasn't on hand to join Chris and challenge him to a dance-off, a newly svelte Gucci Mane was in the building to kick his verse.

Although "Party" didn't win the BET Award for Best Collaboration (the award coincidentally went to Migos for "Bad and Boujee"...oop!), Chris Brown has a lot to celebrate with the impending release of his long-awaited album Heartbreak on a Full Moon coming in July.