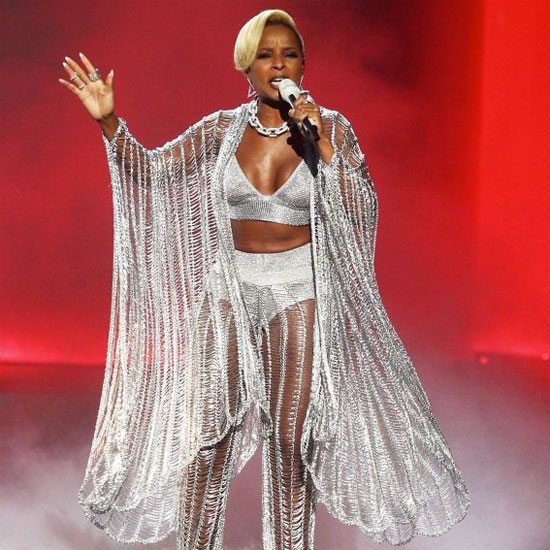 They say the best revenge following a breakup is to put your post-relationship glow up on full display. Mary J. Blige did that and then some during her performance of "Set Me Free" and "Love Yourself" at last night's BET Awards 17.

Opening with just MJB in silhouette form, the lights raised to reveal Mary in all of her revenge body glory decked out in a sparkling chain-linked number that left little to the imagination. Moisturized for the gawds, the Queen of Hip Hop Soul looked nothing short of amazing. The performance, however, got off to a rocky start as she seemed to have trouble hearing from her in-ear monitors during the opening notes of "Set Me Free," resulting in her pacing sounding rushed. She soon recovered by the time she transitioned to the second part of her performance when she was joined onstage by rapper A$AP Rocky. The staging mirrored the classic NYC theme of "Love Yourself's" original video .

While the performance left the audience ready for more from Mary, there was at least one viewer who seemed less-than-pleased with the performance – Mary's soon-to-be ex Kendu Isaacs, with whom she is currently embroiled in a bitter divorce. Isaacs, who has been accused of everything ranging from infidelity to wasteful spending, took to social media where he called the performance "forced" in one post before decrying the way everything is playing out in the public eye in another. For her part, Mary has not issued a response to Isaacs, proving yet again that she will let her music speak for itself. Check out the performance to see what got his panties in a bunch and to watch the Queen Mary serve total slayage from head-to-toe.