Maxwell Makes His Case With ‘Gods’ At The BET Awards 17 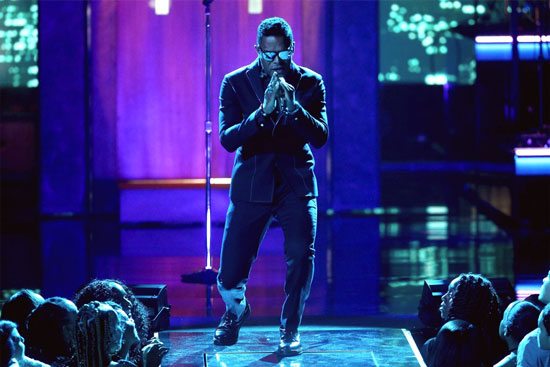 It's been almost 10 years since Maxwell graced the stage at the BET Awards 08 when he strode back into our lives with his showstopping Al Green tribute following an eight-year hiatus from the spotlight. During last night's BET Awards 17 live award broadcast, he returned to woo the audience once more, this time with his single "Gods," taken from his 2016 album, blackSUMMERS'night.

Fresh off his recently-wrapped summer tour, the performance began with the crooner strutting onto the stage. Sticking close to the video's neon-themed visual, the darkened stage featured illuminating lights that shifted throughout the performance to reveal a city skyline. If fans were looking to hear the song's original version, then they may have been disappointed at the stripped-down rendition heard last night. The string-laden version provided a welcomed respite on a night when most performers stuck to pre-recorded turn-up anthems. Decked out in a slim cut, tailored suit and a pair of mirrored shades, Maxwell was the picture of cool as he confidently strolled across the stage, at one point lying on his back. Like the song, religious imagery was sprinkled all through the performance from the double doors featuring crosses through which he entered the stage to when he sprawled on his back as if offering himself up for sacrifice.

With his tour now over, there's no telling what's next up for our favorite Haitian-American singer. As long as we don't have to wait nearly a decade for another album, we'll be more than happy to standby.