‘There’s Something Special’ In The Air For Pharrell Williams 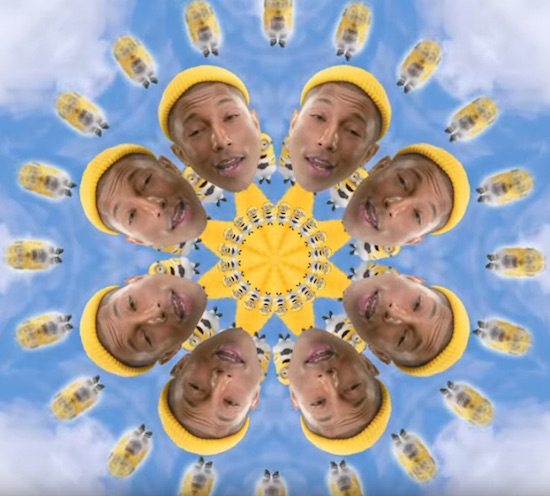 Despicable Me 3 hits theaters on June 30th in case you haven't been paying attention to the current media blitz. Also enjoying some heavy promotion right now is the Despicable Me 3 Original Motion Picture Soundtrack, which drops on this Friday, June 23rd. Led by the Pharrell Williams' singles "Yellow Light" and "There's Something Special," the latter is the latest to get a video treatment and it's quite a Despicable affair.

The visual for "There's Something Special" once again finds Pharrell hanging with the Minions. This time around, the little yellow guys are their normal hi-res animated selves instead of the 8-bit vintage video game-like characters we saw in "Yellow Light." Against a backdrop of blue skies and pillowy clouds, they can be seen floating in the air playing instruments and doing aerial stunts. While they're floating about, Pharrell's singing head topped by a bright yellow knit cap joins in on the fun, with he and the Minions encircling each other in kaleidoscopic formations. While all this is happening, numerous scenes from Despicable Me 3 are cut in, and we see more of the action-packed animated film, which is sure to be a summer blockbuster.

There's more new music from Pharrell Williams on the way from the Despicable Me 3 soundtrack, with eight songs from the singer/songwriter/musician/producer featured on the collection. At this rate, there may even be more surprise music videos, so stay tuned to see more of Pharrell and his buddies the Minions, too.


TAGS:  pharrell williams
Previous: Mario Confronts His Demons On ‘Pain Is The New Pleasure’ Next: Chaka Khan Uplifts & Spreads ‘Love’ With Help From B. Slade