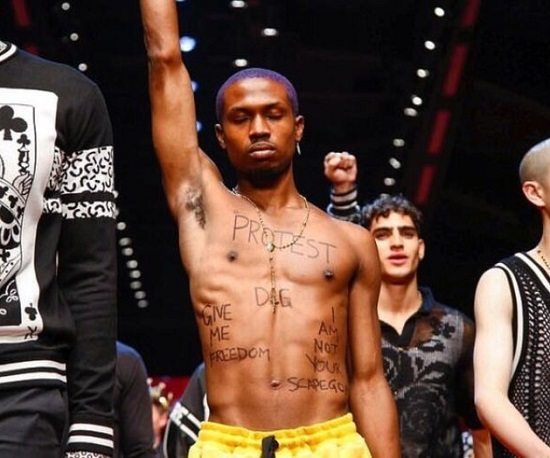 Many say that the next generation is self-centered and apathetic. But based on singer/rapper Raury's recent bold move, that couldn't be further from the truth. Raury, along with the celebrity progeny of Diddy, Rev Run, Snoop Dogg, Shaquille O'Neal and others, was tapped to walk at a Dolce & Gabbana show during Milan's Men's Fashion Week. Ignorant to the fashion brand's spotty racial and political history before signing on the dotted line, he soon learned of them dressing #45's wife, their mockery of protesting and their questionable racial politics. Rather than withdrawing, young Raury took a stand, walking in the show and then taking off his shirt at the finale to reveal anti-D&G messages written on his torso. "I wondered why I was picked to come out here and support them in a time when they're going through some heat," he told GQ. "So here I am, about to be like, Dolce & Gabbana is cool, but I didn't know what they had done. And a lot of [models in the runway show] didn't know what they had done. I felt like Dolce & Gabbana was literally trying to use the youth to wash their hands of any sort of heat from anyone who wants to protest against them." #StayWoke