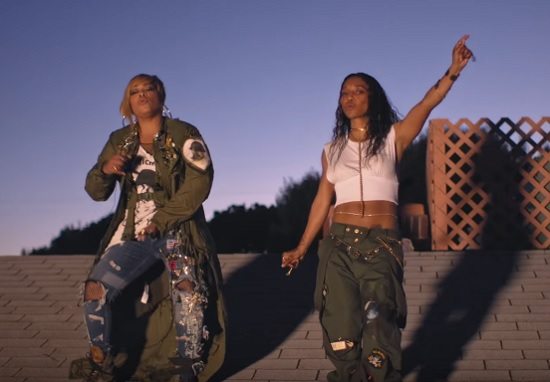 As the official start of summer approaches and days are supposed to get warmer (don't tell that to NYC's current weather though), our thoughts are turning to the carefree fun of sunny days. Perhaps that's why we find ourselves gravitating to the laid-back of records like TLC's recent single "Way Back." The Cali-kissed vibes of the song are perfect for bumping in a Jeep, taking to the beach or getting a house party started. Apparently, T-Boz and Chilli were of the same mind as they throw a West Coast party in the song's just-released video.

The ladies invite us to the kickback of all kickbacks with plenty of party people, good food and good time vibes. All the hallmarks of LA are present in the clip: pools, low-riders, trees and sunny weather. Also abundant is T-Boz's swag, which hasn't diminished in the 25 years since the group's debut album, Ooooooohhh...On The TLC Tip. She struts into the song's first verse with a gaggle of dancers as she bosses up for the camera. Her stroll leads her to inside the house, where we meet up with among a crowd of partygoers and red cups just in time for the song's bridge to hit. From there the ladies take it back outside for a catchy dance routine. Midway through the video, a cloud of grill smoke introduces big homie Snoop Dogg, who looks to have filmed his portion of the video in front of green screen. Though he doesn't join the ladies in person, he makes his presence felt as he blazes up for his hot 16.

Just like the track, the video for "Way Back" is a reminder of an era where all it took was good music and good weather to make a party memorable. Reminisce with us and TLC in the clip for "Way Back" below.