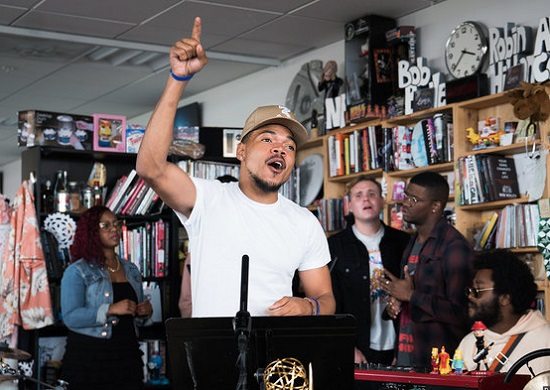 In most offices, an all-call announcement is usually reserved for business matters such as department meetings and the like. However, when you work at NPR, that all-call announcement can mean an impromptu Tiny Desk Concert performance by none other than Chance The Rapper. Such was the case last month when the announcement on the PA system literally sent employees scrambling to get a seat for the show. The lucky ones who made it in time were in for a treat and now we, the general public, can finally see what NPR staffers got to witness that day. The result is a three-song performance that found the GRAMMY winner taking on Stevie Wonder, spoken word and his own music in the clip.

Chance opens the performance by sharing with the crowd his admiration of the Tiny Desk format despite not having realized that it actually takes place at an office desk. After drawing several laughs at that admission, he then goes into a vibrant rendition of Coloring Book's "Juke Jam." Backed by Donnie Trumpet & the Social Experiment and four backing singers, Chance brings the same raw soul to the live version as he does on the studio recording, effortlessly holding the audience at rapt attention. His awe of the moment is evident as he goes on to shout out other Tiny Desk alum Tank and the Bangas and Gregory Porter.

He then transitioned to reading "The Other Side," a poem that he had written during the ride from his hotel to the NPR offices, further emphasizing the creativity that seems to flow from the Chicago native. Although he was briefly interrupted by a PA announcement, he soldiered through as he read from his hastily jotted notes. The mood then shifted once more as Chance launched what would be the final song of his performance, a cover of Stevie Wonder's 1974 single, "They Won't Go When I Go." Dedicating the song to someone close to him who had just suffered a personal loss, Chance fully commits to Stevie's melancholy musings as his backing vocalists, who include trio Thirdstory, inject a spiritual touch thanks to their four-part harmonies.

All in all, Chance's Tiny Desk debut provides viewers with a quick snapshot into what has made the Windy City MC one of music's recent success stories. With his blend of social commentary, optimism, humbleness and spirituality, it is hard to not be pulled in by his infectious nature. When it feels this good, why even fight it? Take a look at Chance The Rapper's NPR takeover to find out what had staffers racing for the doors. 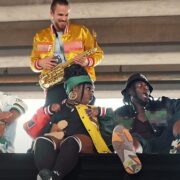