Kendrick Lamar & Rihanna Test The Limits Of Love In ‘LOYALTY.’ 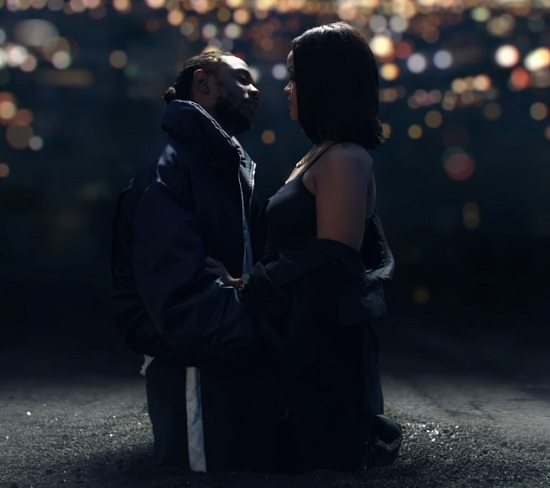 A sage man who went by the name of Meatloaf once wisely sang, "I would do anything for love...but I won't do that." Judging by the brand-new video for DAMN. track "LOYALTY.," that's not a philosophy that Kendrick Lamar and Rihanna subscribe to. Continuing in the tradition of eye-popping videos from K. Dot's junior release, the video packs a lot of visual intrigue and multiple meanings, some of which we're still trying to decipher.

The clip opens with a barking, glowing-eyed dog but then quickly switches to a red-light-lit, freaky-deaky sex club where a blindfolded Kendrick sits as scantily clad women writhe around. But just before what seems to be the queen bee plunges a knife into him, we're whisked away to a street scene with Kung Fu Kenny and his crew as challengers try to step to him and quickly sink into the asphalt. Another quick cut introduces Rihanna's verse as she appears to flirt with a guy through the window of his luxury car but then spits her gum into it instead, infuriating the guy and forcing Kendrick into a fight that she enjoys with an impish grin. From there, the video is an exercise in extreme dysfunction. He dangles her from the edge of a skyscraper, they do donuts in the middle of the road until a truck crashes into them and eventually they sink into the street together. Oh, and in between all that, sharks are let loose into the concrete streets and Cornrow Kenny at one point plays mob boss as he has an intense convo with himself on the bridge before his girl takes him out.

As you can see, there's definitely a lot to unpack here as the rapper and director Dave Meyers have given us a lot of imagery to take in. Join us in deciphering Kendrick Lamar's latest visual by pressing play on "LOYALTY." below.