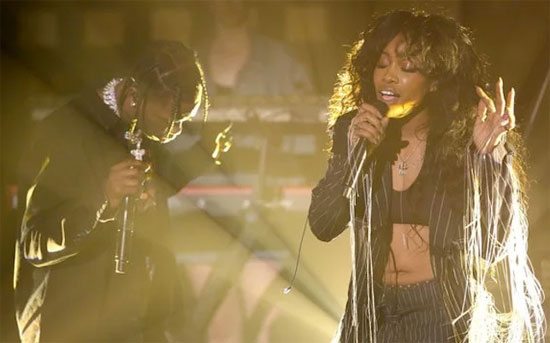 Leave it to The Tonight Starring Jimmy Fallon to give SZA some shine with her first network television performance of “Love Galore.” The New Jersey native already wowed us with a live performance of the song at the BET Awards ’17, but this time she brought along her duet partner Travis Scott with her.

SZA warmed up the stage wearing a custom crop top DKNY pinstriped suit with some Yeezy Boosts. Instead of giving us a straight version of the song from CTRL, the artist employed a slight affectation into her vocals as she’s done on previous live performances. That, however, didn’t influence the delivery of her vocals, which were crystal clear. Crammed on the stage with her band, the singer made use of every inch, casually skipping and playing with the fringes on her outfit, while belting out “LOOOOOOOOVE!!!!!” to the audience. Rapper/producer Travis Scott later joined her on stage, delivering his verse without missing a beat. The two had great chemistry, which only added to the performance.

Both SZA and Travis Scott plan on tearing up stages across the country and beyond. Travis is currently on the road with SZA’s labelmate Kendrick Lamar on The DAMN. Tour. Meanwhile, SZA will be headlining her own CTRL Tour starting August 16th in Richmond, Virginia. In the meantime, hit play below to get a sneak peek at what could be rolling up to a venue near you soon.