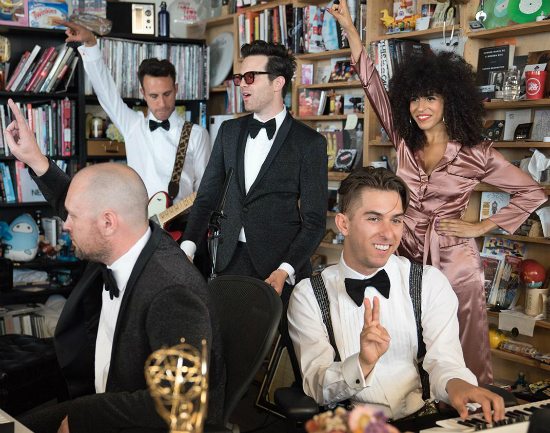 You should know by now that nothing brings us more joy than seeing our favorite artists perform behind Bob Boilen's desk at NPR's Washington, D.C. headquarters. The level of creativity required to perform in an office space, surrounded by computers, printers and NPR employees is always amazing to watch when we get to attend NPR Music's Tiny Desk Concert series. This time, we piled into the office to watch Tuxedo, the funky duo comprised of Mayer Hawthorne and Jake One, backed by their band and the beautiful songstress Gavin Turek on background vocals. We immediately knew we were in for a treat when Mayer prepped his boombox on the piano and repeatedly pressed his "Ho!" sound effect button that they've been using on tour.

Performing "Do It" from their debut album Tuxedo, the band strategically stood or placed themselves in office chairs, so they would each have just enough space to bring their disco flair to NPR. They even got the audience involved in a mean two-step and singing along to the chorus when they transitioned the track into "2nd Time Around" from Tuxedo II. By the time Mayer stood next to Gavin and showed us their choreographed moves, we were all sold. For their third and final track, Tuxedo transported us to a bluesy '70s bar, performing the slow jam "July," also from Tuxedo II.

While we entirely expected Tuxedo to bring all the funk, soul and style to NPR's Tiny Desk, we were pleasantly surprised by the amount of comedy, creativity and pure talent all of the members of the band brought to the table -- um, desk. After the performance the SoulBounce team hung out to speak with Gavin and obsess over Mayer's suit and chat about his favorite breakfast spots on the East Coast. Watch Tuxedo's performance at NPR below and get your groove on at your desk or wherever you are when you press play.