Usher Puts In Work With James Corden For ‘Carpool Karaoke’ 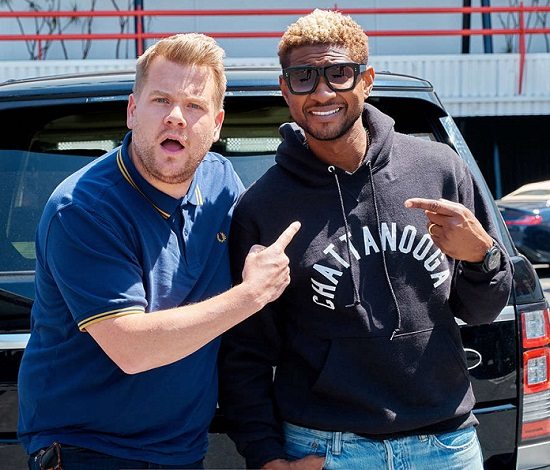 It's probably not the best time to be Usher right now, what with allegations, rumors and lawsuits accusing him of passing on herpes to a few women. To his credit, the singer has remained decidedly quiet and has kept a relatively low profile despite it all. Perhaps that's why it's kind of nice to see a smiling, happy Usher during his recent appearance on The Late Late Show With James Corden's latest edition of "Carpool Karaoke."

The beloved segment, which is set to become its own series next month, saw host James Corden picking up Ursh as he cruised through the L.A. streets. However, this wasn't your usual edition of "Carpool Karaoke." Sure, the twosome sat in the car as they sang along to some of Mr. Raymond's biggest hits like "Yeah," "Caught Up," "OMG" and...um..."Burn," but, perhaps for the first time ever, the two also logged some time outside of the car. At one point, the duo parks so that Usher can show James a few dance moves. Then they hop out once again to take a gander at Ursh's star on the Hollywood Walk Of Fame, which they subsequently clean (a hilarious moment happens here when a fan questions if he is indeed Usher). Then he proves that he's a stand-up guy when they hop out of the car to help a few people push their car to a local mechanic shop. It's without a doubt the most work we've ever seen anyone put in for the segment, but it might also be the most fun we've seen had as well.

If you want to watch a good time, check out Ursh and James Corden getting their carpool karaoke on below.