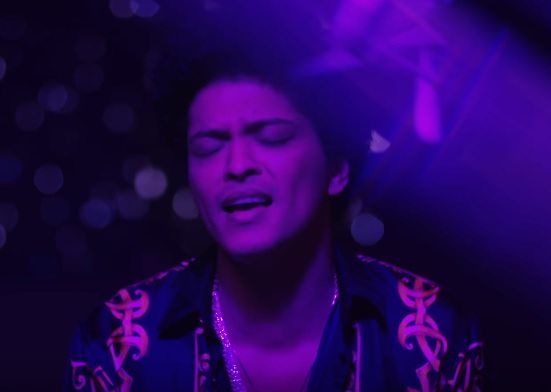 Bruno Mars is currently thrilling audiences while in the middle of the North American leg of his 24K Magic World Tour. However, having a relatively full schedule didn't stop the "Perm" singer from taking some time to shoot the video for his recent single "Versace On The Floor." The singer, which recently saw a remix from David Guetta, amps up the song's charm (and star power) by including rising Hollywood starlet Zendaya in the mix for a video that's sure to get you in the mood.

The clip begins with our boy Bruno stepping off a gold-plated hotel elevator draped in 'Sace down to the loafers. Walking to his room, he's opening his door when he looks over to see a foxy Zendaya doing the same in the room next to his. With an obvious attraction between the two, there's only one thing for him to do. Bruno sits down at his baby grand piano (because he lives the kind of life where his hotel room comes equipped with one) and serenades her through the hotel walls. The simple gesture seems to work, as Zendaya can't help but to lean against her wall and ear hustle as he sings his lyrics of love. As the song progresses, she slinks around the immaculately decorated hotel room as she sings along. She eventually heeds the song's instruction, kicking off her heels and letting her sparkly gold dress hit the floor. The last thing we hear (but don't see) is her faint knocking on Bruno's door, leaving us to assume she was ready to make a move.

It's a cute concept that stays true to the song, and the inclusion of Zendaya is just the cherry on top. Take a peek at Bruno Mars' "Versace On The Floor" video right here.


TAGS:  bruno mars", Zendaya
Previous: SoulBounce Live: En Vogue Live At The 2017 Summer Spirit Festival, 8.6.17 Next: We Think You Should Get To ‘Know’ Mullally