We’ve Got Nothing But ‘Love’ For India.Arie & Tyrese’s Tribute To Roberta Flack At Black Girls Rock! 2017 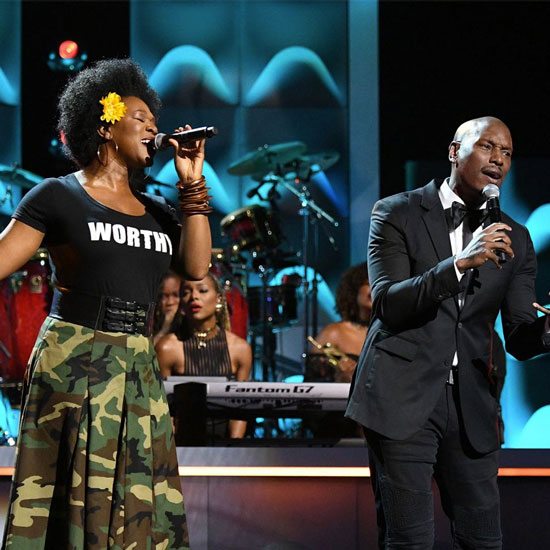 Singer/songwriter/musician Roberta Flack has enjoyed an illustrious career that few achieve. However, it provides us all with the inspiration and confidence to reach for the stars. For this, and many other reasons, she was honored at the Black Girls Rock! 2017 ceremony with the Living Legend Award.

Ms. Flack's tribute began with a video montage featuring John Legend. He described the icon as, "...one of the great songwriters of our history. She’s written songs that have made an indelible impact on many musicians, including myself.” The way too short highlight reel then covered her unforgettable duets with Donny Hathaway, The Fugees ' cover of “Killing Me Softly With His Song” and how her songs feel like a “sanctuary,” inspiring some while comforting others.

After those kind words were shared, Maxwell presented the award to Roberta and she kept her acceptance speech short and sweet. She pulled no punches but plenty of heart strings. Sitting in a wheelchair and needing the assistance of an aide, Flack had everyone's eyes and ears. Her speech began with the words, “To join you tonight has not been easy.” She then shared a list of reasons people told her she’d never make it. The things everyone hears, but not everyone is able to withstand like, "You’re not good enough," "You’re not pretty enough," "You’re too fat," etc. Then she broke the tension by nonchalantly reciting, “You didn’t laugh.” The living legend then regaled the audience with a number of quotables about love and self-acceptance. Most notable was the idea that love is a song, and that it is a song that everyone should sing because someone out there in the world needs to hear it. Her speech served not only as an inspiration to others but as a clever reminder of the wit and wisdom of a true artist.

After Roberta gave everyone the feels, we were then treated to a wonderful tribute performance from India.Arie and Tyrese. The set started with India.Arie killing us softly with a version Flack’s 1973 GRAMMY Award-winning song “The First Time Ever I Saw Your Face.” India sat center stage strumming her pain on the guitar, giving a quiet yet powerful performance of the ballad. India then put her guitar down and spoke directly to the living legend from the stage, saying, “Roberta, we all love you so much. And this tribute would not be complete without honoring the timeless love songs you did with Donny Hathaway.” Arie was then joined on stage by singer Tyrese who was more than ready to give us his best Donny Hathaway impression. At this point, BET might as well put Tyrese on retainer for all of their awards shows. He always kills it. We heard a rumor that Lauryn Hill was supposed to be on hand to perform “Killing Me Softly,” but, of course, she arrived too late to perform. Thankfully, India.Arie and Tyrese gave it their all in her absence and she wasn't even missed.