Ledisi & Kirk Franklin To Join Forces On ‘The Rebel, The Soul & The Saint Tour’ With Special Guest PJ Morton 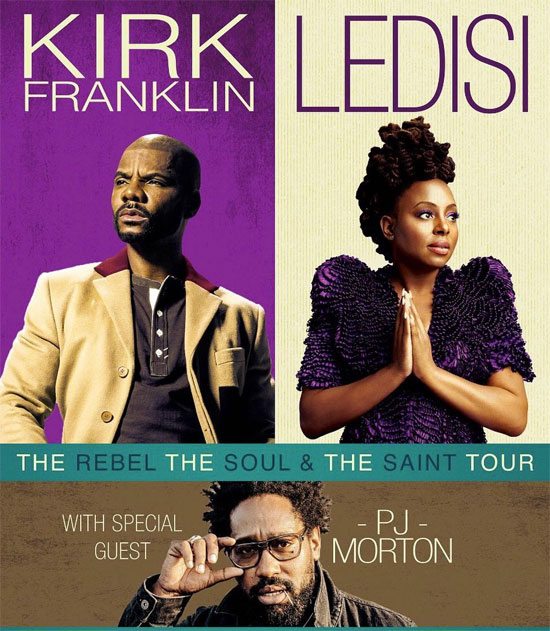 Ledisi was high on our list of artists who need to drop a new album this year, and she will answer our prayers on September 22nd with the release of Let Love Rule. That's not all that the vocal powerhouse has on the horizon, with the announcement of a major tour this autumn. After wowing audiences earlier this summer on the road with Maxwell and Leela James, Ledisi is this time teaming up with Kirk Franklin to co-headline The Rebel, The Soul & The Saint Tour.

The Rebel, The Soul & The Saint Tour will combine Ledisi's soulful R&B and Franklin's inspirational gospel for a stellar evening of music that will hit 27 cities across the United States. The tour begins in October on the West Coast, kicking off in Oakland before hitting Sacramento, Los Angeles and Phoenix and making its way East to cities such as St. Louis, Chicago, Detroit, Nashville, Atlanta, Baltimore, New York City and Richmond, where the tour wraps in December.

Ledisi and Kirk Franklin touring together is big news on its own, but PJ Morton is also on the bill in select markets as a special guest. Check out the entire list of tour dates below and make plans to get a musical blessing at this concert. The Rebel, The Soul & The Saint Tour is shaping up to the the hot ticket as the temperatures get colder and 2017 winds to a close. VIP pre-sale tickets are on sale starting today on both Ledisi.com and KirkFranklin.com.

The Rebel, The Soul & The Saint Tour Dates: