LeToya Luckett Does It All ‘In The Name Of Love’ 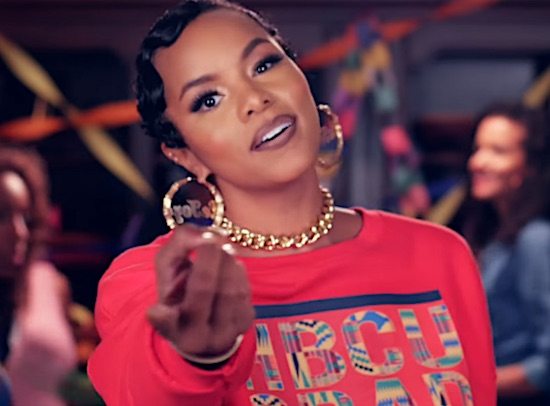 LeToya Luckett is rounding out her mini-movie trilogy in promotion of her latest album, Back 2 Life. In the series’ final installment, fans get 12 minutes of dramatic goodness, and her latest single “In The Name of Love” provides the soundtrack. The visual also offers answers about the status of LeToya’s relationship with her leading man Omar, played by actor and former NFL running back Thomas Q. Jones from Being Mary Jane fame.

While the track itself, produced by Warryn Campbell, is a catchy tune perfect for the summer, the video provides enough heat on its own. We watch as Omar tries to work his way back into LeToya’s good graces, while she struggles to forgive. Meanwhile, he still struggles with being in love with her and simply loving his best friend Cynthia, who is at the root of the couple’s problems. Still, LeToya accepts Omar’s invitation to his '90s-themed party, which serves as perfect placement for the new single. There's something about that good '90s R&B that makes you just feel good, and all of the previous tension between the two just seems to melt away. This seems to be all Omar needed to get right, as he soon finds himself meeting up with LeToya after the party with a ring box in hand. In true soap opera-esque fashion, we are left hanging as whether she accepts his proposal or tells him exactly where he can put that ring. This is just the type of non-ratchet juiciness we love, and we applaud LeToya for flexing not only her vocal muscles but her acting chops as well.

Ms. Luckett seems to be on a mission as we’ve been seeing a lot of her lately. She’s had recurring roles on the Fox drama Rosewood, as well as the hit series Greenleaf on Oprah Winfrey’s network OWN.  She is also set to join our favorite No More Drama Queen Mary J. Blige on the Strength Of A Woman Tour this month.

Get your popcorn ready and check out the video for LeToya Luckett’s “In the Name of Love.”  If you missed chapters one and two, be sure to check out the cinematic videos for 'Back to Life" and "Used To" as well.