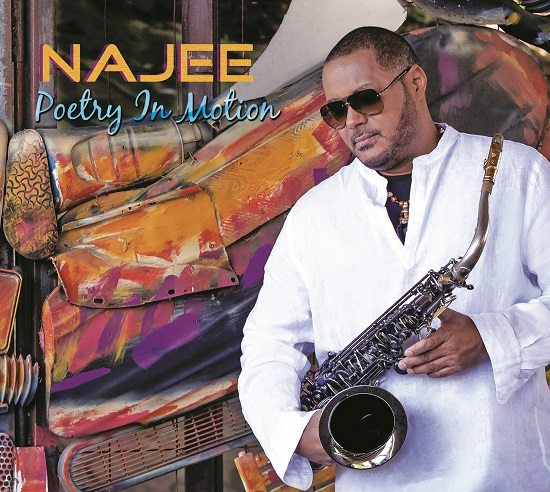 Equally comfortable in both the jazz and R&B realms, Najee has spent the last three decades wooing audiences around the world with his inimitable saxophone playing skills. The respected musician has amassed several awards, five No. 1 albums and four No. 1 singles on the Billboard charts throughout his distinguished career. To top it all off, he's collaborated with darn near everyone; a trend he continues today with the release of his 17th studio album, Poetry In Motion.

Via press release, Najee reveals, “What makes this album special to me is the ability to create a project that has so many different elements but yet make sense musically speaking.” In addition to stellar production by the legendary Barry Eastmond, the album boasts appearances by Incognito, Will Downing, Eric Roberson, Maysa, Bobby Lyle and Blake Aaron. The saxophonist described his excitement for the talented lineup, saying, “The beautiful thing about this particular project is that I get to work with friends that I love and respect in the music industry…and their contributions and gifts to bring home a project that I think my fans will enjoy.”

Poetry In Motion is another noteworthy addition to Najee's catalogue, and listeners will have no problem connecting with the jazzy gems contained in therein. We're admittedly biased, seeing as how some of our faves are featured in the 10-song collection. Instrumental track "Let's Take It Back" is a breezy, Latin-infused jam session with Incognito. Meanwhile, the band's front woman Maysa titillates with the invitational "Don't Make Me Wait." Will Downing (who also celebrates three decades in the biz this year) brings warmth and depth to "We'll Be Missing You," Najee's personal tribute to Prince and Al Jarreau.

A true highlight of the album is the long overdue collaboration with our boy Eric Roberson called "Is It The Way." (No, it's not a Jill Scott remake, but the romantic tune is destined to become a classic just like Jilly's slow jam.) The fellas have known each other for years, yet the track marks the first time they've recorded together. Thankfully, the end result was well worth the wait. We totally agree with Najee's assessment, “Eric Roberson is a special talent...he brought a different element with this record.” Erro's relatable lyrics and sleek vocals were tailor-made for the mellifluous tones floating out of the soprano sax.

Released today via Shanachie Entertainment, Poetry In Motion is available to stream below and for purchase on Amazon, iTunes and Google Play Music. Najee will also be performing in a handful of shows this fall, so check his website for details and follow him on Facebook, Twitter and Instagram for updates.