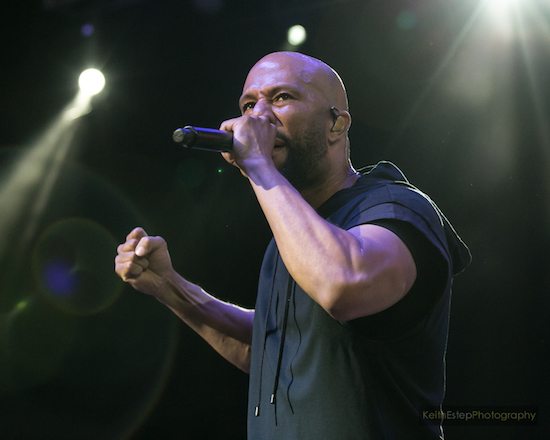 It's been five years since Common graced the Summer Spirit Festival, but this was the year for Chicago's finest to make his return and what a return it was. Accompanied by his full band, including Maimouna Youssef on supporting vocals and DJ Aktive on the ones and twos, Com Sense brought the heat from the moment he set foot on the stage and started spitting "The Corner." He had the audience hanging on to his every word as he ran through songs old and new from his deep catalog including "The Food," "U, Black Maybe" and "Black America Again."

When it came time for "Red Wine," Common set the mood with an actual bottle of red wine and two wine glasses before he invited a woman from the audience to join him onstage. The lucky woman was living the dream and her best life as she had a drink with the man of the hour in front of an audience of thousands. Common upped the ante by performing a freestyle for his date before segueing into "Come Close." After giving us his best mack daddy vibes, he hit us hard with back-to-back fire with "Testity" (which incorporated a killer blend with Prince's "Darling Nikki"), "Love Of My Life (An Ode To Hip Hop)" and "I Used To Love H.E.R." Just when you thought his show couldn't get any more hype, De La Soul trotted onstage to to kick 'The Bizness" from their album Stakes Is High with him and then DJ Aktive set it off even further with a lit set of hip-hop, R&B and even some house music.

Common kept the energy high with "Go" that included a breakdown of Kanye West's "Fade." It felt like the party was just getitng started, but it was actually coming to an end. Com had one last song to deliver and that was "The Light," which Maimouna helped to spice up by adding a little bit of Mtume's "Juicy Fruit" in the mix to bring the show to a sweet conclusion.