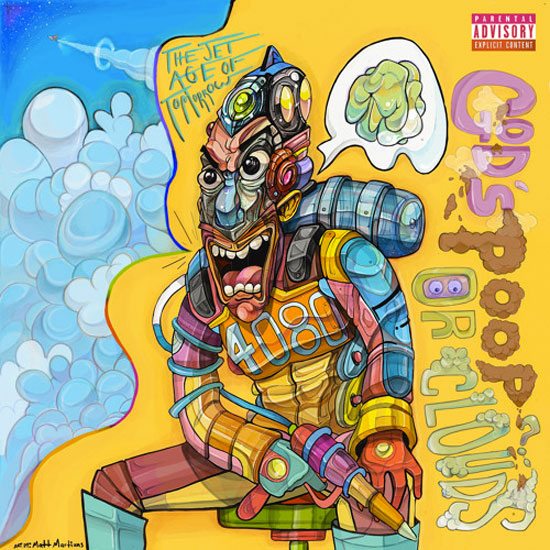 After releasing his debut full-length solo album The Drum Chord Theory earlier this year, it'd be easy for Matt Martians to sit back and chill for a bit. After all, he dropped the album after capping off a stellar two-year run that saw him earning a GRAMMY nod alongside his The Internet cohorts for 2015's Ego Death, in addition to a steady touring schedule. But he is doing anything but kicking back as indicated with the announcement a new project and single as one-half of The Jet Age of Tomorrow. The production duo, which also features founding Odd Future member Pyramid Vritra, just dropped their latest single, "Fly Like Me" ahead of the release of their sophomore album, God's Poop Or Clouds? next month.

For Jet Age's first release since their 2013 debut, The Jellyfish Mentality, they tapped singer MarKUsFree and producer Zack Villere for the album's lead single. The song opens up with a delicately layered sound similar to the intergalactic vibes we've come to expect from Martians. It's at once soothing and simple as MarKUsFree repeats, "Oh you really really wanna fly like me? / All you gotta do is spread your wings" over the sparse track. However, things take a turn around the two-minute mark when the tranquility gives way to a thumping bass before extending into a full-on dance party that lasts for the song's final minute and a half. It's a surprisingly fun finish to what initially starts out as a mellowed out groove.

The project is just the latest to come from this uber-talented collective. Martians' Internet bandmates Syd and Steve Lacy, in addition to Vritra have all been letting their creative juices flow on solo projects recently. After dropping her own debut solo project Fin back in February, Syd has already announced the release date for her follow-up and dropped a new single in the process. Meanwhile, Lacy has been expanding his catalog thanks to his own solo EP. Vritra has been just as busy on his end, releasing a steady stream of material in the interim since he and Martians' dropped The Jellyfish Mentality. The Jet Age of Tomorrow's latest God's Poop Or Clouds? is due out September 15th.