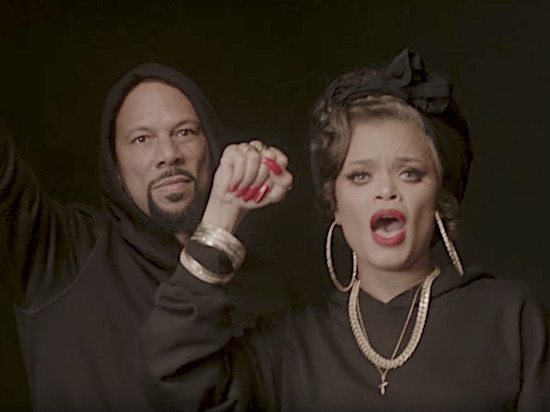 She's already encouraged us to "Rise Up," and now that we're on our feet, Andra Day wants us to "Stand Up For Something." The singer's latest anthem is a clarion call for everyone to take action about something, anything. It's fitting that the track was the first single from the soundtrack to the film Marshall, a biopic about the groundbreaking life of Thurgood Marshall, that opened in theaters on Friday, October 13th. To coincide with the movie's release, Day also premiered the music video for "Stand Up For Something," which is equally as powerful as the film.

For the "Stand Up For Something" visual, Andra is joined by Common, who guests on the track that he co-wrote with venerable hitmaker Diane Warren. We see the two artists dressed in black hoodies and black pants on a simple black soundstage. Despite their dressed down appearance, Andra still manages to glam up her look with long red fingernails, gold jewelry and her signature updo/headwrap combo. While she sings, Common plays the background and dramatic scenes from Marshall are cut in. Once we get to the bridge, it's time for Com's verse and as he begins to spit his outfit changes from hoodie and jeans into a suit while Andra's look also gets a similar update. The song and video end with Andra driving the message home with a rousing finish to activate the activist in us all.