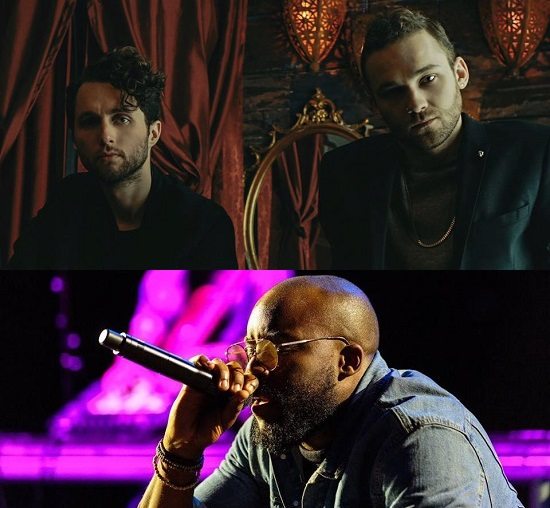 If you ask most people who call New York City home (this writer included), they'll tell you that their relationship with the city is a love-hate situation. And please believe, on many days, that hate is strong due to MTA slowdowns, the rent being too damn high, general inconsideration from its citizens, the cold, gray winters...the list goes on. But NYC is also a great city to live in with a thriving cultural scene and the love for what it has to offer often outweighs the hate. That's probably why there are so many songs dedicated to it, and you can add another with the release of NYC native sons Brasstrack's latest single "Brownstone."

"Brownstone" (not to be confused with the '90s R&B trio) is a loving tribute told through the lens of a first-timer's visit to the city. The first-timer is featured vocalist BXRBER, who wrote the song with Brasstracks during his first visit to the city. "It’s all about his love for New York City, in the eyes of someone who had never seen it before," group member Ivan Jackson told MILK.XYZ. "It was so special to me and Conor [Rayne], to hear that, because it’s so easy to love New York, but New York doesn’t always love you back. So to hear it from his perspective, we were like, “Damn, we really need to put this on the project,” because it’s so…what we needed to hear." It's something everyone needs to hear, honestly, as the two forces joining together make some truly beautiful music together. Brasstracks laces the track with the same feel-good, horn-laden hip-hop/soul that won them a GRAMMY for "No Problem," including a sped-up soul loop in the background adding an extra soulful kick. BXRBER takes that feeling and runs with it as he paints a loving picture of the Big Apple, from its bright lights to its buildings and cultural significance. He makes it all sound so beautiful and new that even a New York cynic would want to fall in love with the city all over again.

"Brownstone" will be one of six tracks featured on Brasstrack's EP For Those Who Know, Pt. 1, which drops this Friday (October 20th) and also features an appearance from our main man Robert Glasper. Make sure that you pre-order the set on iTunes and press play below to hear the feel-good vibes of "Brownstone."