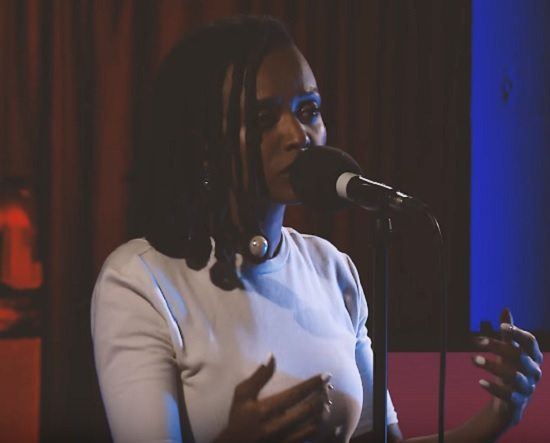 Kelela is currently basking in the afterglow of releasing her debut album Take Me Apart, and rightfully so. It's packed back to back with jams like "LMK," "Frontlines" and "Waitin." Speaking of which, our girl recently hit the UK to promote the effort and managed to get some time in with the good folks at BBC Radio 1 for their Piano Sessions. She took a moment to perform a stripped back version of "Waitin" and deliver an unexpected and haunting cover of Sade's "Like A Tattoo" that was a pleasant surprise.

"Waitin" takes on an interesting quality when pared down to just Kelela's voice and piano. The song, about a chance encounter with an ex you still have feelings four, sounds much more personal and intimate. Stripped of all the synths, the sentiment and uncertainty are brought into sharper focus, allowing her to manipulate the experience with her phrasing and volume in a way that you just can't do on wax. She continued the intimate feel with her cover of "Like A Tattoo." The original, which found Sade telling the story of a former soldier who committed a war crime, paired the legend's vocal with only acoustic guitar, so Kelela's piano-accompanied take makes sense. She takes advantage, delivering an intensely emotional reading of the song while showing some of the vocal power that she doesn't always exhibit on all her records. All in all, she did the song and Sade proud with her interpretation.

We highly suggest that you get into the magic that Kelela delivers in these two performances by pressing play below. Thank us later.