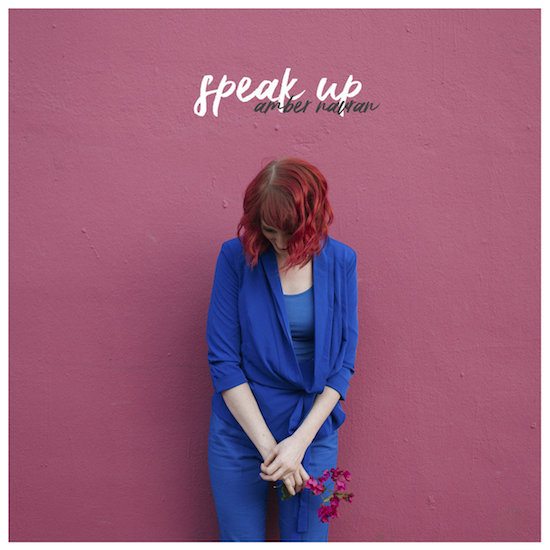 2017 is shaping up to be a big year for Moonchild's Amber Navran. After releasing the group's sublime third album, Voyager, embarking on a successful cross-country jaunt, and appearing on Rapsody's critically-acclaimed album Laila's Wisdom, she has clearly made the best of her time this year. Now, she proves that she can add even more to her plate with the release of her first solo EP, Speak Up.

Appropriately titled, the five-track effort provides listeners with the opportunity to hear what's on the multi-instrumentalist's mind. "He's Been Gone" and "Lastaya Love" find her tackling that difficult phase between a relationship's demise and making the conscious decision to no longer mourn said relationship. "He's Been Gone" serves as a self-made wakeup call in which Navran decides that enough is enough and will no longer allow herself to feel sad about it. Meanwhile, "Lastaya Love" centers around the realization that she can — and will — be better off walking away from a relationship that has run its course.

On Speak Up, Navran maintains the same soothing, rich quality that has made Moonchild a favorite to many. Handling the production, songwriting, recording and mixing herself, its clear that much of the group's unique sound stems from Navran, who also handles many of the same duties during their recording process. Nowhere is this more evident than on the dreamy "Time's Up," the album's opening track. The song begins simply enough, with the sounds of a ticking clock, before blooming into a lush and ethereal groove. Navran's layered vocals further add to the song's indulgent vibe.

She experiments a bit on "Letter 7/Say Yes," kicking things off with spoken word-inspired observations about love and fulfillment. However, things shift during the song's second half as Navran trades in the Rainer Maria Rilke-penned verse for an interpolation of Floetry's 2o02 hit "Say Yes." The album's third track, "Float," is an instrumental number sprinkled with undercurrents of hip-hop that make themselves known through the song's bassline and drum track.

For her first outing as a solo artist, Navran proves that there's enough creativity in her reserve to create memorable vibes for both Moonchild and on her own without missing a beat. Take Speak Up for a spin to see if Navran is capable of holding her own for yourself. Also, be sure to check out the group's upcoming tour dates to see if they'll be making a stop in a city near you.