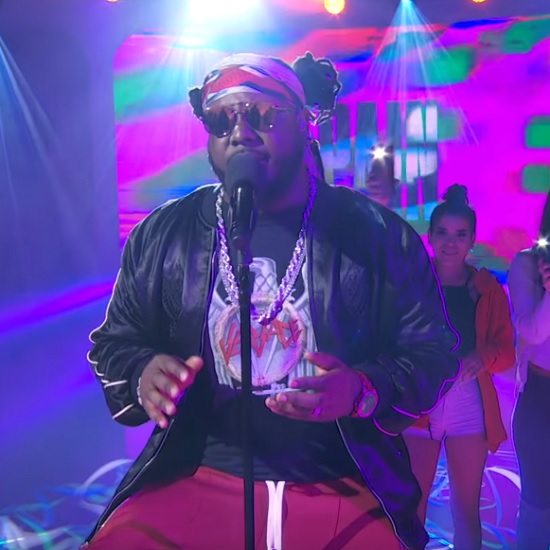 Believe it or not, T-Pain has been in the game long enough for today's youngsters to warrant his music as "old school." We'll let that sink in for a moment. Feeling old yet? Good! Moving on, Teddy Penderassdown, who has made most of his career off of Auto-Tuned croons, has recently decided to forgo the audio effects and bless us with his natural singing voice. The result has been surprisingly well-received, with many actually taking notice of the "Buy U A Drank" star's singing ability. He recently showed off his natural chops again by giving the audience at the newly rebooted (and totally unnecessary) TRL a stripped back medley of his former hits.

Sitting on a stool in the TRL studio, he was surrounded by audience members waving their lit-up cell phones in the air as he began the medley with a slowed down version of 2007 party starter "Buy U A Drank." From there, he segued into other hits like "I'm In Luv (Wit A Stripper)," "Bartender" and others before working in one of his current smashes, "F.B.G.M." The admittedly melodramatic take on the songs is a bit laughable, if we're being honest (especially when he's singing about the way a stripper is working the pole). However, T-Pain's earnestness brings attention to the fact that he can actually sing, even if he hits a few bum notes here and there.

Check out Teddy Pain doing the damn thang below and stick around for a performance of his latest single, "Goal Line" featuring Blac Youngsta, after that.