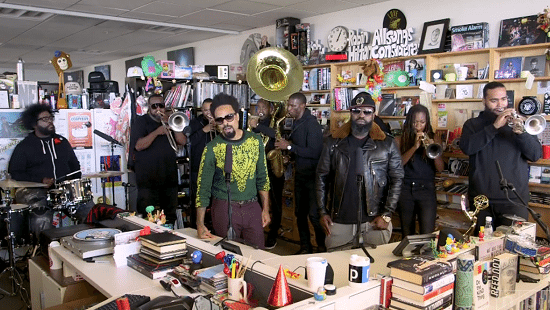 Though the movie it's attached to, Detroit, didn't necessarily light up the box office, The Roots and Bilal's soulful "It Ain't Fair" has proven to have left a much larger impact. In fact, like John Legend and Common's "Glory" before it, the track is getting some serious Oscar buzz. Perhaps capitalizing on the moment, The Legendary Roots Crew has made it a point to trot it out whenever they can (like when they performed it during their main gig on The Tonight Show). Recently, the hip-hop collective graced the desk over at NPR Music's Tiny Desk Concert series to give those lucky enough to attend a dose of funk and a soul-filled, horn-laden rendition of the song.

The set started out with trombonist Jeff Bradshaw, Roots member Tuba Gooding and a succession of black-clad horn players marching into the room before soon being followed by Questlove, who counted off the players before they got down with a funky little intro. After moving the crowd (and warming up their instruments), out came Bilal and Black Thought, much to the audience's delight. Seeing as the song's music is played by all horns, this performance definitely gives a different feel from others that we've seen and heard. Still, it doesn't skimp on the soul of the song or the urgency of its message. In fact, the horns kind of add a bit more urgency and mood to the track, accentuating Bilal's lament during the verses and adding fire to Black Thoughts rhymes.

While The Roots have always laid it down on wax, they're always at their best in a live setting, and this performance is not an exception. Check how they rock Tiny Desk below.


TAGS:  bilal, black thought", jeff bradshaw, questlove, the roots
Previous: Willow Smith Prepares Us For ‘The 1st’ With Her Angsty ‘Romance’ Next: Majid Jordan Lights Up The Night To Make Your ‘Body Talk’ 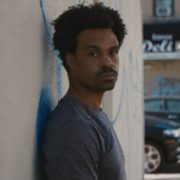 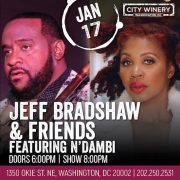