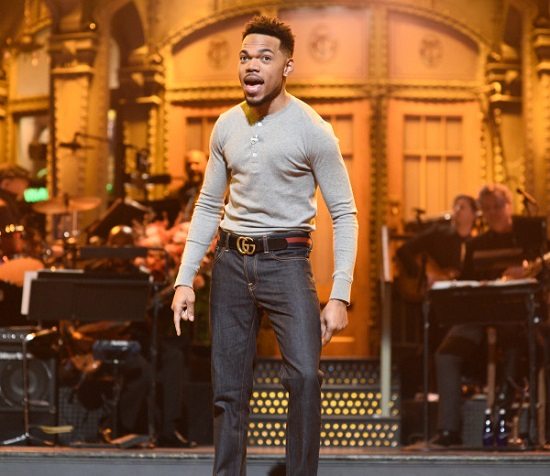 Chance The Rapper didn't have an album or movie to promote nor was he a featured musical guest, but he did take the stage at Studio 8H as host of the pre-Thanksgiving edition of Saturday Night Live (making him the sixth rapper to ever do the honors). Though not known as a comic or actor, he made sure to bring the funny during his time on the show, knocking sketch after sketch out of the park. However, it was his two musical moments that really stole the show.

First up was the downright hilarious sketch "Come Back, Barack." Stylized like the many of the classic videos from '90s male R&B group, Chance, Chris Redd and Kenan Thompson delivered a slow jam for the ages as De-Von-Tré. But instead of begging for a woman to come back home or to get another chance between the sheets, the fellas just want Barack Obama to save us from the sheer terror that is #45. With perfectly placed "woohoos" from Chance and a spoken plea from Kenan, they channeled the era and style so well, we almost put a lighter up. The trio returned again for the sketch "Rap History," which found them playing retired rappers Soul Crush Crew in a hip-hop documentary that also featured comical commentary from Questlove and Common. With names Kool Kenny Blade, DJ Grand Wizard Karate and Chief Bronco, they offered a hilarious send-up of rap's early days as they rocked outrageous outfits (including leather, chains, headdresses, pillbox hats and pearls) and talked about their penchant for smoking reefer (with just a little bit of crack in it).

Chance's hosting gig was definitely a laugh riot, but these two took the cake. Check out both skits below and, if you missed it, hit up OnDemand to get your laugh on with Chance for the full episode.