GoldLink Brings His ‘Crew’ To Take Over ‘The Tonight Show’ Stage 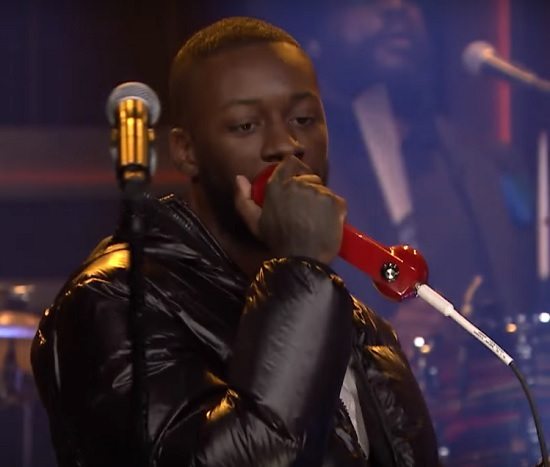 GoldLink dropped his debut At What Cost earlier this year, but the album's lead single "Crew" recently became a certified hit, landing in the top 50 of the Billboard Hot 100. With that happening, of course, it was time for GoldLink to hit the national stage, and he did just that last night on The Tonight Show Starring Jimmy Fallon. He and his crew, Shy Glizzy and Brent Faiyaz, hit the stage along with the program's house band The Roots to show the nation how they do it in the DMV.

Like the song, the performance kicked odf with Brent, dressed in a white hoodie and baggy gray pants as he sang the song's smooth chorus. GoldLink then jumped into his verse while rocking a black puffer jacket and spitting into a mic fashioned to look like a red telephone receiver. With his nimble flow, he rode the beat quite nicely, though his audience engagement left just a tad to be desired. However, Shy Glizzy made up for some of the lack of energy as he stepped on the stage in all black and hyped up for his verse.

Overall, this wasn't the most energetic outing we've seen from GoldLink, but for anyone new to the rapper and his unique style, it was still a pretty good introduction. See GoldLink and his crew doing their thing on The Tonight Show when you press play below.