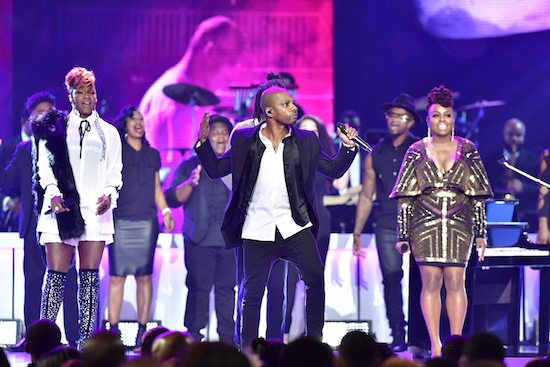 Church was in session during the 2017 Soul Train Awards when Kirk Franklin, Ledisi, Daniel Caesar, MAJOR and Le'Andria Johnson took the stage to perform a stirring rendition of the Harold Melvin & the Blue Notes' classic, "Wake Up Everybody."

The high-powered performance had the crowd on its feet as each star lent their own personal touch to the song. Backed by a gospel choir, the talented group of singers took turns with the song's lyrics with Ledisi kicking things off with the song's opening. She was followed by Caesar, who got the chance to flex his gospel roots with his smooth vocal stylings. From there MAJOR and then Johnson knocked out the second verse before the uniting as one towards the song's end in a powerful finish.

The performance was, of course, punctuated by Franklin's energetic ad-libs, as he encouraged the audience to join in on the fun. The song was a timely selection given the current state of the world and provided a much-needed glimmer of hope as we head into the holiday season.