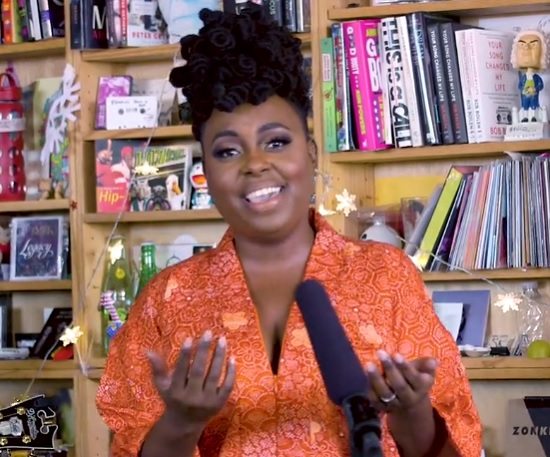 As we've mentioned before, NPR Music's Tiny Desk Concerts have gone from simply indie showcases to attracting some major talent. That's made evident by the latest featured artist for the ongoing series: Ledisi. The songstress, who stopped by in promotion of her latest album, Let Love Rule, came, saw and blew the audience away with a set of uptempos for them to enjoy.

She kicked things off with an energetic acoustic performance of the album's title track, backed only by guitar player Kerry Marshall, percussionist James Agnew and singer Sara Williams. However, even though she worked with a smaller crew and acoustic sound, the song sounded nearly as full as it does on wax. After an unexpected touch-up, she then launched into The Truth single "I Blame You," which allowed for a fun breakdown at the end in which Led scatted her face off. After that slight detour, she continued with more two more tracks from Let Love Rule, "Add To Me" and the album's lead single "High." The sassy "Add To Me" definitely didn't lose a step in its acoustic translation, with James and Kerry keeping the song's swing and rhythm intact as Ledisi and Sara harmonized beautifully. However, the most surprising moment came when she brought out "High." The trap-influenced groove of "High" was Led's biggest musical departure to date but somehow it just worked. But how did that translate to an acoustic setting? Quite beautifully, actually. The quartet of musicians moved through the song like the pros they are in a version that might just be better than original if we're being honest.

You already know Ledisi knows how to kill in a live setting, so any chance to see her in her element is always a blessing. So check out the vocal assassin at work by pressing play below.