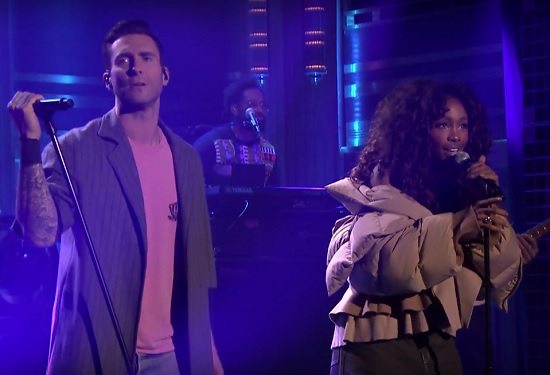 Maroon 5 is gearing up to release their latest album, Red Pill Blues, this Friday. So, of course, the group is on the promo trail to get the buzz out on their upcoming release. What better way to do that than to utilize frontman Adam Levine's relationship with NBC (he's a judge on The Voice — as if you didn't already know that), and land a cushy performance spot on The Tonight Show Starring Jimmy Fallon. That's exactly what the crew did, and they brought R&B "it" girl SZA along for the ride as they performed their current single "What Lovers Do."

The group delivered a breezy performance of the track, with Adam handling his end of the ditty quite nicely [sidenote: is it just us or was he dressed like a member of Huey Lewis and the News?] and SZA delivering an extra dose of personality during her verse. However, while the jam went over pretty well, we'd be remiss if we didn't point that things on stage seemed a bit static. Outside of SZA's erratic swaying and occasional move to the back of the stage, there's was little movement or flare on the stage, leaving the camera to do the moving for them. We're gonna chalk this one up to a lot of people sharing a small stage, but we're hoping that in future performances of the track they put in a little bit more effort.

That being said, it was still a pretty enjoyable set and marks yet another move toward bigger notoriety for SZA. Check them out rocking The Tonight Show stage below.