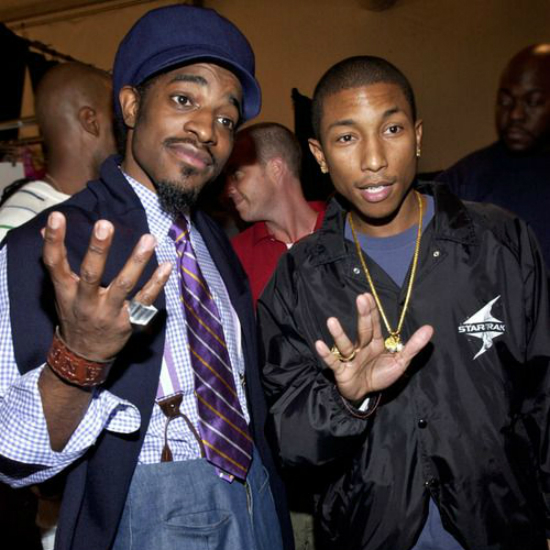 Last week, N.E.R.D roared back into our lives with the Rihanna-assisted banger “Lemon,” a bumping track complete with its own dance moves courtesy of choreographer Jacquel Knight. The group's first new song in seven years (not counting their contributions to the Spongebob the Movie soundtrack), it was good to hear the fellas return to form. With a new album on the horizon and a star-studded list of featured artists on board, we've been eager to hear more from the project. Luckily, the song "Rollin 7s” featuring everyone’s favorite ATLien and musical hermit, Andre 3000, has surfaced online after it premiered on Beats 1's OTHERTone Radio today.

On “Rollinem 7's,” Pharrell Williams discusses their good fortune, bragging, “All the pretty girls wanna be my Heather / Every time I turn around I’m rolling them 7’s." The song is another experimental dance track with a similar glitchy, bouncy feel as “Lemon.” However, N.E.R.D goes a bit further. Once you think you know what’s going on, Pharrell switches it up on you. The sparse track speeds up, and we get more of that signature Neptunes production while Pharrell does his best British pop-wave vocal. For his guest verse, Andre 3000 proves there’s no dust on his pen. “I can’t imagine the hood in harmony / I mean how can I bask in a bloody sun if he don’t see me as a man?” he spits with a maniacal flow. While the meaning behind his lyrics aren’t immediately clear, his flow and energy keep you intrigued until you can catch up to his wit and wisdom.

The only problem with “Rollinem 7's,” similar to "Lemon," is that Pharrell and company are overshadowed by their features. Of course, this might be by design so they can be as weird, strange and out there as they like, while their guests give them mainstream appeal. “Rollinem 7's” will appear on N.E.R.D’s upcoming album, No_One Ever Really Dies, which they previewed at ComplexCon this past weekend. The album will feature Kendrick Lamar, Future, Gucci Mane, Wale and others. For those of us who didn’t make it to the event, the album should be in stores sometime soon and will make quite the stocking stuffer. For now, hit play below to get an advance listen to this track.


TAGS:  andre 3000, audio, Future, gucci mane, jacquel knight, kendrick lamar, n.e.r.d., nerd, pharrell, pharrell williams, rihanna, the neptunes, wale
Previous: Alicia Keys Digs In Her Vault To Unearth ‘When You Were Gone’ Next: Jidenna Shows The Back & Forth Of Love In ‘Boomerang’