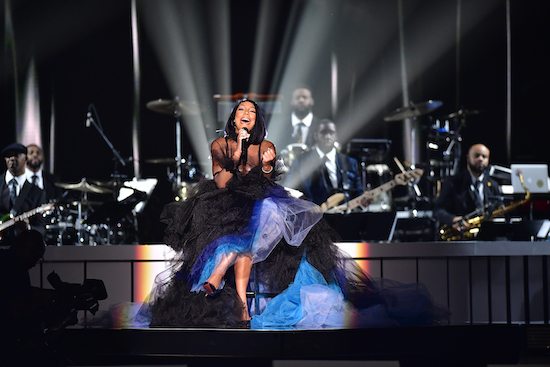 While her sister Toni Braxton might have been the big honoree of the night at the 2017 Soul Train Awards, Tamar Braxton wasn't just going to show and play second fiddle. No ma'am! Instead, Tamar got her own stage time to deliver a performance of her emotional single "Blind."

Changing her look from the fiery red wig look she served on the red carpet, Tamar went dark lady for her onstage moment. Her jet black, asymmetrical bob offset the frilly black tulle of her dress perfectly (with pops of white and light blue to give the look some lightness). And if the all-black look didn't clue you in, Tamar came to kill with her performance. She previously was ridiculed for lip-syncing the house down when she performed the track on The Wendy Williams Show back in September, but there was no vocal trickery on this day. Her voice and performance were on point, with Tay Tay delivering high-key dramatics from her stool as she sang her heart out (with her current divorce drama surely providing fuel for her emotional delivery). Despite the song's sadness, though, she still ended her performance with a smile as the crowd, which included her siblings and mother, gave her a standing ovation.

Catch Tamar Braxton doing the damn thing on the Soul Train Awards stage right here. If you want to see Tay Tay up close and personal, you can catch her as one of the acts on The Great Xscape Tour, which kicked off earlier this month.