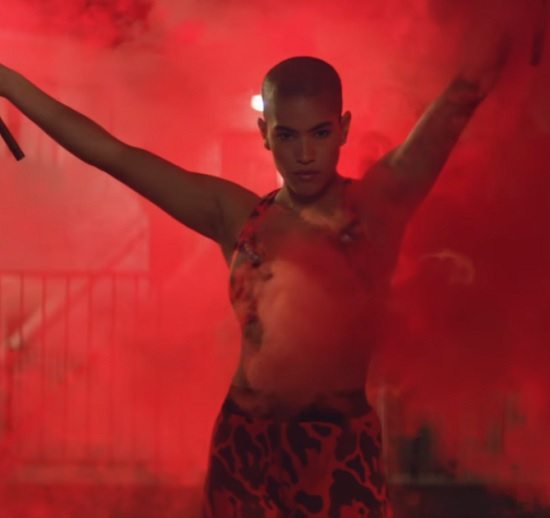 When N.E.R.D played their highly anticipated upcoming album, No_One Ever Really Dies, for the audience at ComplexCon, two things were clear: dancer Mette Towley (who appeared in the "Lemon" video) was going to play a major role in the visual representation of the album and some of the songs would be at least somewhat politically charged (this is especially true for "Don't Don't Do It," which inspired by the police shooting death of Keith Lamont Scott in 2016). These two elements are combined in the video for current single "1000," the latest clip to be released from the album.

The video opens with a disclaimer, which reads, "N*E*R*D AND COLUMBIA RECORDS DO NOT SUPPORT OR CONDONE VIOLENCE IN ANY SHAPE OR FORM. WE ONLY HAVE INTERNET ACCESS." As soon as that title card fades to black, we're presented with violent scenes as protestors clash with neo-Nazis, police and racists. Meanwhile, Pharrell Williams' hyper-kinetic verse serves as narration before the beat slows and the second in their "tutorials" officially kicks off. That's when Mette steps on the scene rocking a red bodysuit in some scenes and red camo in others. Like in "Lemon," she's a woman moving on a mission. However, this time around, she's not alone. Instead, she's joined by a black hoodie-clad army of dancers who move with her with military-like precision. Other elements also come into play here, as well. For instance, there's a break mid-video where Mike Tyson gives a speech about readying to fight a formidable opponent. Then there are other more stylistic inclusions, like colored smoke bombs and ladies spinning the wheels of motorcycles, that add to the toughness and grittiness of all that's going down.

Check out N.E.R.D's latest video below and be sure to look out for No_One Ever Really Dies when it drops in two weeks on December 15.