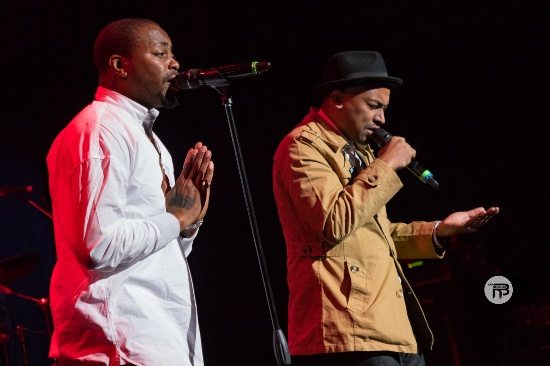 For four years now, Raheem DeVaughn has been bringing together his talented friends for a good cause during the holiday season. Last year, the singer/philanthropist brought the likes of Tweet, Kelly Price and Wale the stage to benefit his LoveLife Foundation, which seeks to gather resources and raise awareness for causes including domestic violence prevention, scholarships and youth and community programming. Held annually at Washington, D.C.'s historic Howard Theatre, the Raheem DeVaughn & Friends Annual Holiday Charity Concert presented by AIDS Healthcare Foundation (AHF) was once again a sold-out show full of music lovers ready to catch their favorite artists on one stage right before Christmas.

The CrossRhodes, Maycee and Chris Scholar headlined the  December 21st concert, which also featured an all-star lineup and some surprise guests. The talent roster included songstress Angie Stone and her fellow R&B Divas co-star Faith Evans, hip-hop legend DMC of Run DMC and hometown favorites The Backyard Band bringing that go-go swing. Raheem couldn't let the show go on without a few surprises, and much like Santa he had some goodies in his bag when he brought out pop-soul singer/songwriter MAJOR. and everyone's favorite couple Kindred The Family Soul.

"This effort is truly a labor of love as we seek to help others through service: from scholarships to deserving students to domestic violence survivor outreach to coat/toy donations to feeding the homeless, this helps others help themselves," Raheem DeVaughn shared in a statement. "Thank you to the fans for the outpour of love and support. We look forward to 2018."

We're looking forward to 2018, too, because this event keeps getting bigger and better. This year the benefit expanded to New York City for a charity concert at Highline Ballroom on Friday, December 22nd, featuring yet another all-star lineup with performances Ro James, MC Lyte, Doug E. Fresh, Lil Mo, Freeway and Chris & Neef at a sold-out show. Stay tuned to see what Raheem DeVaughn and The LoveLife Foundation do next. For more information on the organization, visit their website and follow them on Instagram and Twitter.