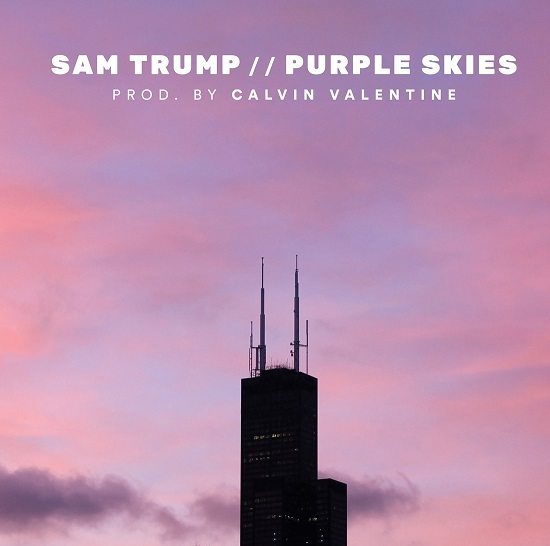 If you've been following us for any amount of time, you know that we have a special kinda love for our Bounce-Worthy picks. It especially does our hearts good when we see how far they've come since our first listen. So, of course, we have to shout-out our boy Sam Trump, member of Sidewalk Chalk, who recently revealed his debut album Purple Skies.

The indie artist admits that the Calvin Valentine-produced album is long overdue (it's been almost four years in the making), but we're willing to cut him some slack as he's been very busy building up a global fanbase with Sidewalk Chalk. Not to mention his impressive catalogue of guest features, singles and EPs. In fact, it wasn't that long ago that he wooed us with his Love Notes EP and the SharmonJarmon! collaboration "Spain." Still, his excitement is understandable because Purple Skies is definitely something to be proud of.

On top of previously released tracks like "Count On Me" and "Brother" (which features Chi-town rapper, Add-2), the set contains nine additional original songs that deliver soulfully good vibes from start to finish while touching on themes of love and unity. His earnest vocals – a blend of old-school soul, southern gospel, and alternative R&B – settle-in nicely among layered harmonies, jazzy chords, chilled beats and the mellifluous sounds of his horn-playing.

Sidewalk Chalk fans needn't worry, though; Trump hasn't left the band. Ironically, the inspiration for the album's title came while on tour with the band. He was reflecting on his blessings and happened to be listening to an instrumental track that Calvin had sent him. The sun was setting around that time, and the ensuing amethyst tones sparked a moment of creativity that led to the title track and a full-length studio session.

We're excited to see Sam Trump taking risks, and we're loving this project that offers a closer look at his artistry. Although it won't be available via all major platforms until January 2018, Purple Skies is currently available as a soft release for his "fans, friends & family" via Bandcamp. Support good music and purchase a copy today. Visit Sam's website and connect with him on Facebook, Twitter and Instagram for details on upcoming shows throughout December and January.