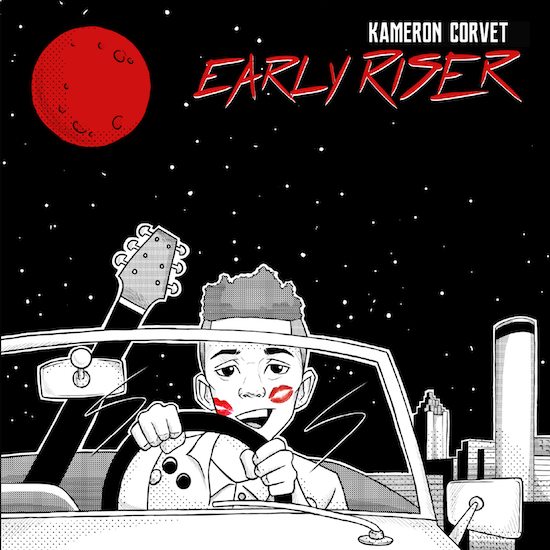 Kameron Corvet has been prepping us for the release of his EP Early Riser since he dropped the first single, "Throw the Rest Away," exactly a year ago today. After a slight delay, the project is now available for our listening pleasure. It is indeed satisfying to finally get our hands on this new collection of songs from the Atlanta-based singer/songwriter/guitarist who has enthralled us with a musically delicious blend of Rock & Soul, as he refers to his sound. On Early Riser, Corvet combines his talents with those of producers Bryan-Michael Cox, Pierre Medor, Kennard Garrett, Valley and Red Pill, and the result is a seamless body of work that SoulBounce is extremely happy to exclusively world premiere.

"Throw the Rest Away" opens the nine-track set. The song remains unchanged from the previously released version, but why mess with perfection? The current single, "Heaven," follows, and the lyrics are both tender and titillating as Kameron invites us into his bedroom while he films a love scene with his lady. "Leg on my shoulder / Girl, you're almost there / I can feel your heartbeat / The way you gasp for air / My hands are in your hair / Every time we reach the final scene," he sings on the pre-chorus, getting listeners hot and bothered. He smoothly segues into the chorus of the trap soul number, admitting, "You make me feel like I died and went to heaven." With its sensual content and Kam's killer harmonies, we're thinking that heaven must sound like this.

After that strong one-two punch to kick the EP off, Corvet keeps the momentum going on the third track, "C'est comme ça." The French phrase translates into "It's like that," and Kameron speaks in French on the intro. However, you won't need an interpreter for the rest of the electric guitar and percussion-heavy song as he sings about sharing the good life and all its trappings with his lady. Lyrically, the track might come off as braggadocious, but Kameron Corvet makes upgrading his lover sound so sincere. On "Random Hearts," he reminisces about a lost love atop a rhythmic sound bed featuring bass, Spanish guitar and accordion.

Corvet continues taking us through paces and phases of love on Early Riser, expressing regret and rocking out on the uptempo "Made You Cry," exposing a former lover's intentions now that his career is on the come-up on "Dear Life" and questioning where a broken relationship stands on the catchy mid-tempo, "Leave It Like That," which was previously released in 2015. The EP wraps with the second single, "All to Myself," and the final track, "Be Ready," which ends the set with a passionate lament about the tragic inevitability of heartbreak in the search for love. Deeply in his feelings, Corvet warns, "Ooh-oh-oh, be ready, be ready for it all / Ooh-oh-oh, be ready, be ready for the fall," on the chorus. The instrumental outro, complete with violins, electric guitar and piano, serves as the perfect climax for the song and the EP as a whole.

Early Riser takes listeners on an emotional roller coaster ride through the ups and downs of love, but it will only make you fall deeper in love with Kameron Corvet. Vocally, lyrically and artistically, he is at the top of his game and has released his personal best with Early Riser.