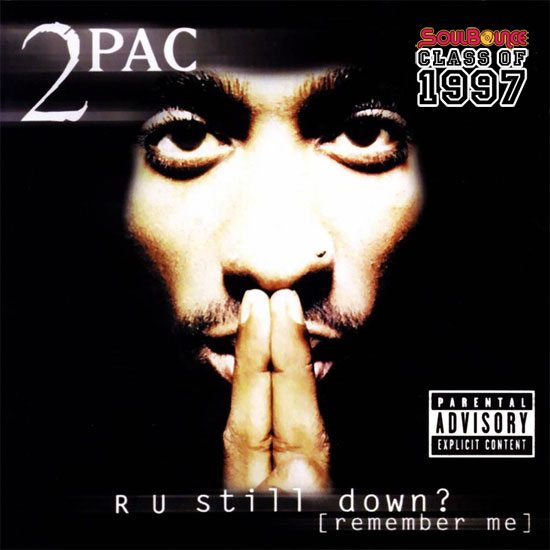 Despite his untimely death in September 1996, Tupac "2Pac" Shakur continued to climb the charts. The West Coast emcee still had more to say, and his mother Afeni Shakur made sure it was done right. She released his second posthumous album R U Still Down? (Remember Me) through her imprint, Amaru Entertainment, after winning the rights to 2Pac's music in her lawsuit against Death Row. R U Still Down? focused on 2Pac's view of life before the contentious East Coast and West Coast rivalry. While it stayed true to 2Pac's style, here looms a dark cloud of death over the majority of its content, which could be seen as a foreshadowing of his death.

The two-disc album featured a collection of tracks 2Pac recorded between 1992 and 1994. Tracks like "Open Fire" and "Thug Style" gave us goosebumps as he delivered bar after bar that sounded eerily close to that fatal night in Las Vegas. A product of his environment and the entertainment industry, 2Pac made sure we felt his rage on tracks like "Hellrazor," where we can hear him panting at the end of the track, and"F**k All Y'all," where he calmly cursed out his naysayers. After going from one angry track to another, we do get an upbeat 2Pac on tracks like "I Wonder If Heaven Got a Ghetto" and "Do For Love," which both went on to become number one hits. "Definition of a Thug N***a" made the cut after it appeared on the soundtrack of the 1993 film, Poetic Justice. While he shared a lot of himself on the album, "16 On Death Row" is one of the more vulnerable tracks where he talks about the dark world through the eyes of a paranoid teen. Using funk and blues to his benefit, Pac paints a bleak picture you can feel every time you press play. 2Pac closed out the 26-track album with "Only Fear Of Death," which served more as an ellipsis than a period on what could have served as a statement about the rapper's life. While Afeni did her best dusting off of tracks from the Interscope vault, R U Still Down? (Remember Me) didn't quite tell a cohesive story from track to track, but it served more as a memorial showcasing the rapper's lyrical talent.

The album did, however, spawn number one hits, sold 549,000 copies in its first week and topped the R&B charts for three weeks, reaching multi-platinum status with four million units sold in under a month. After R U Still Down?, there were more posthumous albums in store for 2Pac fans. Fast forward to 2017, the rapper's story found a home on the big screen in All Eyez On Me, directed by L.T. Hutton, 2Pac's long-time friend and music collaborator. Whether it's a 26-track posthumous album, or a movie helping us explain Pac's ideology and overall life, what remains true is that we're still down to hear what he has to say and it's unforgettable.

2Pac R U Still Down? (Remember Me) [Amazon][iTunes][Google Play]