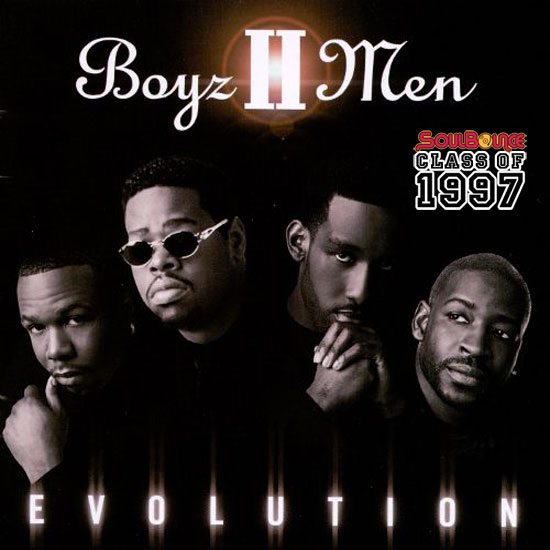 After the runaway success of their first two albums, 1991's Cooleyhighharmony and 1994's II, that catapulted them to pop superstardom, Boyz II Men looked for a threepeat with the release of Evolution in 1997. Their fourth overall recording at the time — they dropped their evergreen holiday collection Christmas Interpreations between their freshman and sophomore sets in 1993 — had all of the makings of another hit collection with who's who of songwriters, producers and hitmakers, including Babyface, Jimmy Jam and Terry Lewis, involved in the production. Unfortunately, with all the star power behind Evolution, it couldn't match the success of its predecessors and signaled the start of a downward trend for BIIM.

Don't get it twisted, Shawn Stockman, Nathan Morris, Wanya Morris and Michael McCary sounded as amazing as ever on Evolution; there was no change in the quality of their vocals. However, the material itself was all a bit lackluster. Lead single "4 Seasons of Loneliness," while a sweet song about the lingering feelings of heartbreak wasn't bad, was no "Motownphilly" or "I'll Make Love To You." Nonetheless, the track debuted at No. 2 on the Billboard Hot 100 and hit No. 1 the following week. Evolution also got a boost from the follow-up single "A Song For Mama," which was also featured on the Soul Food Soundtrack and has been trotted out on every Mother's Day or occasion honoring mothers since. The Boyz also took on New Edition's "Can You Stand the Rain" with a slowed down a cappella remake that showcased their otherworldly harmonies. Although the album got a relatively sleepy start with ballads, it woke up halfway through thanks to productions from Sean "Puffy" Combs and a few of his bad boys (Stevie J, Ron "Amen-Ra" Lawrence and Jeffrey "J-Dub" Walker) on "Can't Let Her Go," "Come On" and "To The Limit" and Keith Crouch who contributed "Baby C'mon" and "All Night Long." Unfortunately, of those songs, only "Can't Let Her Go" was released as a single and it made little impact, with the rest of the tracks largely becoming forgotten about album cuts despite there being a few bops among them.

Evolution debuted at No. 1 on both the Billboard 200 and R&B Album charts, but it would be the last time that Boyz II Men would see that apex. The album sold a solid but modest three million copies worldwide, which paled in comparison to the numbers their previous releases did. They came up short at the GRAMMY Awards the following year as well, but a Spanish-language version of the album, Evolución, would go on to snag a Billboard Latin Music Award for Pop Album of the Year by a New Artist. Behind the scenes, label drama reared its ugly head between the Boyz and Motown, and Evolution would be their last on the label. In the 20 years since Evolution, Boyz II Men have continued to evolve and are still together (minus Michael McCary) making music and money moves. This year they released their 13th studio album, a doo-wop tribute project Under the Streetlight; have enjoyed a successful ongoing residency in Las Vegas at The Mirage and had a street near their high school renamed Boyz II Men Boulevard in their hometown of Philadelphia. Boyz II Men's enduring legacy looms large.