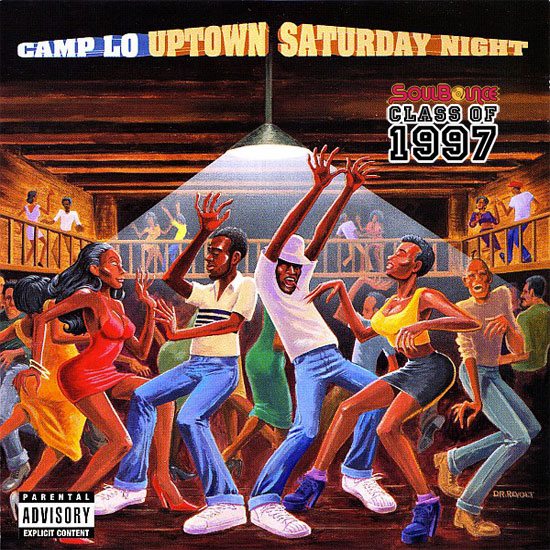 Hip-hop was in a very interesting place in 1997. By March, the culture had lost two of its most promising stars in 2Pac and The Notorious B.I.G. At the same time, the previous year saw stellar albums from upstarts like Jay-Z and Busta Rhymes and solid efforts from vets like Nas, Outkast and A Tribe Called Quest. However, with all that innovation from old and new alike, the scene wasn't quite ready for the debut album of Bronx rap duo Camp Lo. Their debut arrived in January 1997, however, it would go on to influence the sound of hip-hop for years to come.

Perhaps what set Campo Lo, which consists of members Geechi Suede and Sonny Cheeba, apart from the rest of the crop was their unique style and sound. The duo steeped themselves in '70s nostalgia, from the cover of the record (a play off of artist Ernie Barnes' iconic "Sugar Shack" painting), to the album's title (which shared a name with the classic '70s comedy featuring Sidney Poitier and Bill Cosby). Nostalgia also manifested itself throughout the set's 15 tracks. Produced almost entirely by Ski, who most famously contributed several tracks to Jay-Z's debut Reasonable Doubt, the set became revered for Geechi and Suede's dexterous flows and unique wordplay. The first track heard from the album was "Coolie High," a laid-back jam built upon an expertly flipped sample of Janet Jackson's "Funny How Time Flies" which was placed on 1996 film The Great White Hype's soundtrack. However, the most recognizable track, and the group's biggest hit to date, was the infectious "Luchini AKA This Is It." The song hit No. 50 on the Hot 100 and No. 5 on the Hot Rap Singles chart. Pushed by the success of "Luchini," Uptown Saturday Night would eventually peak on the Billboard 200 at No. 27.

Outside of the single's success, though, Uptown Saturday Night, was perhaps known for Suede and Cheeba's blaxploitation-like narrative. The songs took us through their adventures as they went from the streets on tracks like "Krystal Karrington" and "Negro League" to the swanky high life feel of songs like "Sparkle" and "Black Nostaljack AKA Come On." It provided a counterpoint to the grittier gangsta rap of the West Coast, the backpack vibes of the more conscious acts and the jiggy flossing of the Bad Boy era. It also gave them a seat at the table, earning them a prime feature on Will Smith's Big Willie Style and eventual collaborations with De La Soul and Aesop Rock.

Camp Lo's sophomore album, Let's Do It Again, didn't fare as well among critics and on the charts as Uptown Saturday Night, but that hasn't slowed the duo down. They've constantly and consistently released music since then, including dropping four releases — On The Way Uptown and the three-volume A Piece Of The Action —  in 2017. Something tells us that, though they might not again see the heights reached by their debut, the slick-tongued duo will no doubt continue to keep the underground bubbling.