SoulBounce’s Class Of 1997: Common ‘One Day It’ll All Make Sense’ 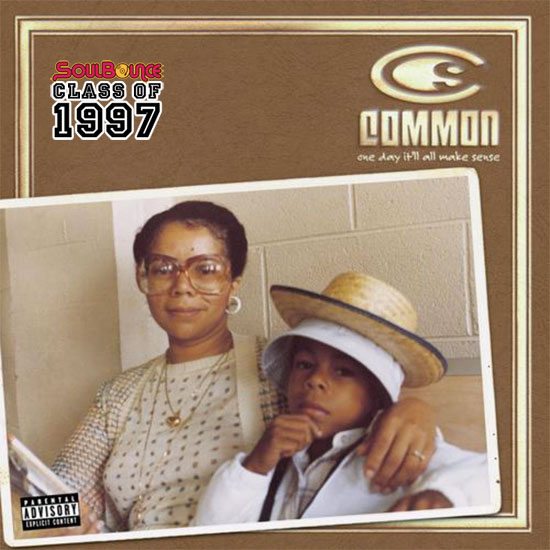 By 1997, we started moving away from gangster rap, and R&B super groups were climbing the charts. The want for R&B and soul was growing and by 1997 too, blending hip-hop with jazz had quickly become a '90s cliché — one that Common Sense had skillfully mastered. The Chicago rapper launched his career in 1992 with Can I Borrow A Dollar?, and solidified it with 1994's Resurrection. Stepping away from music to become a dad, he later released his third studio album, One Day It'll All Make Sense, in the fall of 1997. It was the last Common album to feature producer No I.D. and the first where he would simply go by the name Common. The album's cover is a picture of an 8-year-old Common with his mother, Dr. Ann Hines, proving he's always had the b-boy style in him and, of course, a soft spot for his mom.

With its consistent thread of the love of black people, life and family, in One Day It'll All Make Sense, Common was a Midwest rapper with something substantive to say. Using jazz, poetry and spirituality, Common used the album to survey his life. With old-school rhymes over modern beats, Common told his story the minute the album started. The album's first single "Reminding Me (Of Sef)" channeled the '80s and served as a eulogy to a close, deceased friend of Common's. He also used R&B vocals to his advantage, to keep the rap-heavy album easily digestible to newer audiences. This may explain the stellar line-up of R&B and hip-hop assists on the album. He recorded "Retrospect For Life" with emcee/singer Lauryn Hill, about the birth of his first child Omoye Assata Lynn. Lauryn later directed the visuals for the track. Goodie Mob's CeeLo Green provided vocals on "G.O.D." (which stands for "Gaining One's Definition"). Rapper Canibus is featured on the track "Making A Name For Ourselves," and De La Soul joined him on "Gettin' Down At The Amphitheater." Rappers Black Thought and Q-Tip appeared on "Stolen Moments" Parts "II" and "III," and The Roots produced "All Night Long." Of course, the tracklist wouldn't be complete without Common's future bae, Erykah Badu, who provided vocals on the single that gave a nod to Yarbrough & Peoples' "Don't Stop the Music." Staying true to his previous and future projects, Common's father Lonnie Lynn closed the album out with some words of wisdom on "Pop's Rap Part 2 / Fatherhood."

One Day It'll All Make Sense only sold 2,000 copies in its first week and 250,000 copies overall, making it a Billboard flop. Undeterred, after its release, Common started working with the Soulquarians for his next studio effort, Like Water for Chocolate. Over a decade later, Common penned an autobiography, using One Day It'll All Make Sense as its title, and the New York Times bestselling memoir discussed his childhood on Chicago's South side and his emergence as one of rap's biggest names. Common continues to prove he's uncommon. The rapper/actor won several awards for "Glory," his duet with John Legend from the 2014 film Selma where he co-starred as Civil Rights Movement leader James Bevel. He also uses his voice to highlight injustice and encourage change, on projects such as his 2016 album Black America Again, which targeted police brutality and the racist climate, and his most recent collaboration with singer Andra Day on the single "Stand Up for Something," from the soundtrack to the biopic Marshall. The multihyphenate also has his Common Ground Foundation to reach the youth. There's nothing common about Common, and we've figured it out decades later where it finally makes sense.