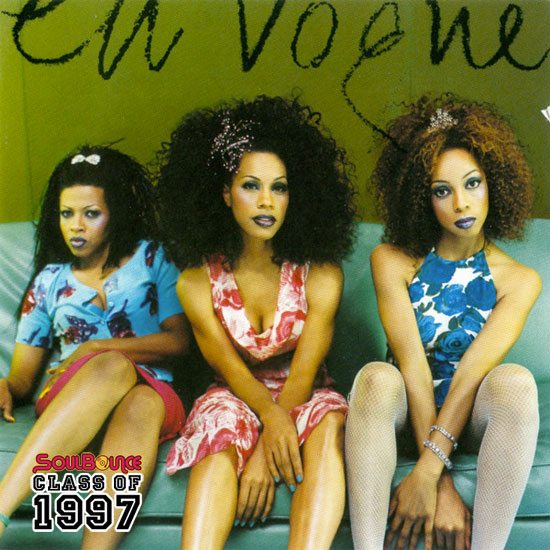 While many R&B groups of the '90s have been relegated to "Where Are They Now" status, a few of our faves are reaping the benefits of a recent resurgence in popularity. Most are riding the wave of nostalgia and happily coasting on their past hits, which is totally fine with us. But of the handful who are still putting out new music, En Vogue is probably at the top of our list of most anticipated comebacks. The trio is gearing up for their first release in almost fifteen years, Electric Café. The quartet of singles that we've heard thus far are more than enough to silence any skepticism about whether or not they've still got "it" (they do!). Very impressive considering the fact that 20 years ago, we weren't so sure they'd still be around today.

After two hugely successful albums – Born to Sing and Funky Divas – the ladies of En Vogue were hoping for a threepeat with EV3. The number three would turn out to have even greater significance as the original quartet suddenly became a trio when the abrupt departure of Dawn Robinson when contract negotiations and her solo aspirations left Cindy Herron, Terry Ellis and Maxine Jones to regroup as a trio. We were used to seeing the ladies bring the drama with their impeccable harmonies, bold fashions and memorable videos, but this particular "drama" forever changed the dynamic of the group we had come to know and love. Nevertheless, as they say in the biz, "the show must go on." And go on it did.

As luck would have it, the trio had one helluva lead-in courtesy of platinum-selling single "Don't Let Go (Love)," which originally premiered in 1996 via the Set It Off soundtrack. Ironically, the last song to prominently feature Robinson's lead vocals ended up being their biggest hit to date and their last No. 1 on the R&B charts. But whatever, Dawn...we got it from here, thank you for your service.* EV3 also marked the first time that founding producers Denzil Foster and Thomas McElroy didn't steer the entire project. The ladies were in good hands, though, with heavy hitters like Babyface ("Whatever"), Diane Warren and David Foster ("Too Gone, Too Long"), Ivan Matias ("You're All I Need") and, of course, Organized Noize ("Don't Let Go (Love)"). The album would eventually attain platinum status after peaking at No. 8 on Billboard 200.

The years following EV3 were problematic to say the least. Several lineup changes (including a few temporary reunions of the original four), Dawn's "bait and switch" tactics (make up your mind, girl), contract breaches, lawsuits and all-around shadiness (*cough* Heirs to the Throne and En Vogue to the Max *cough*) would've been the nail in the coffin for just about any other group. But these sisters aren't just talented, they're resilient. Besides, there were some bright spots throughout the troubled times, namely the addition of Rhona Bennett who consistently filled in the gap whenever Dawn (and Maxine) would leave and is now an official member alongside Terry and Cindy.

*Though Dawn Robinson left the group before the June release of EV3, her already-recorded lead and/or background vocals can be heard throughout most of the album. And don't get it twisted, we still love her (hello, Lucy Pearl) like a wayward cousin.