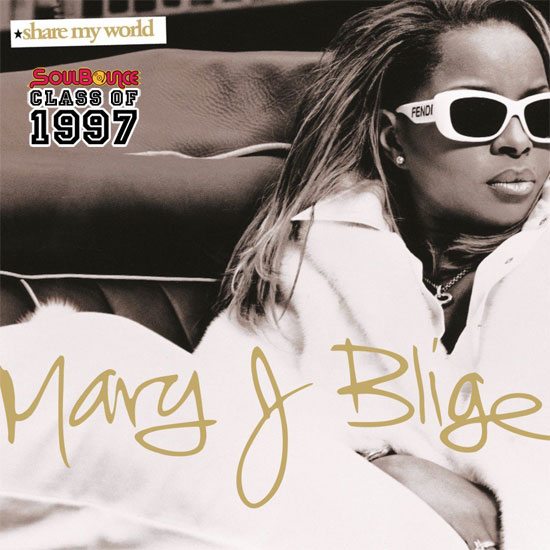 Sometimes you have to experience a little bit of change in order to grow and get to the next level. Sometimes that change may cause some pain and discomfort, but there’s a solid chance that something good will come of it. For Mary J. Blige, that period resulted in her third studio album, Share My World. The album came following the end of her sometimes volatile relationship with K-Ci Hailey; her severing ties with Sean “Puff Daddy” Combs professionally; and Blige transitioning to MCA Records after leaving her former Uptown Records label home.

Though it would have been easy for such turmoil to have a negative effect on the new album, for Blige, all of the transitions marked a positive time in her life. The album also signaled the first of many successes for the resident New Yorker. Share My World marked the first album she executive produced, in addition to being her first album to take the top spot on the Billboard 200 chart following its debut of 240,000 in its first week. To aid her in her new quest and fill the void left behind after the dissolution of her professional relationship with Combs, she enlisted the help of R. Kelly, Poke & Tone, George Benson, Kelly Price and Bryce Wilson. It seemed the new direction she was heading in was paying off. Fans, new and old, were drawn to this new, lighter vibe that she was serving on songs like the Jimmy Jam & Terry Lewis-produced lead single, “Love is All We Need.” Although it featured a verse from Nas and had a music video, the song never received an official physical release.

However, that did little to slow the album’s momentum. Blige followed up with “I Can Love You” featuring Lil’ Kim. Produced by super producer Rodney Jerkins, the song provided the perfect vehicle to bridge the gap between Blige’s original streetwise sound and the new path her music was taking. With a full push from the label, “I Can Love You” eventually made its way to No. 2 on the US Hot R&B/Hip-Hop Songs and No. 21 on Billboard Hot 100. One of the album’s most successful songs had actually been released over a year prior. “Not Gon’ Cry” first appeared on the Waiting to Exhale Soundtrack with the Babyface-assisted song becoming one of Blige’s signature songs and most popular hits to date.

Over time, the triple platinum-selling Share My World has come to represent a major turning point in Blige’s career, helping her transition from just being the “Queen of Hip-Hop Soul” to being one of music’s most enduring and successful artists. Many of the songs, such as “Seven Days” can still be heard regularly on radio and are amongst some of her most requested songs during live shows, proving that sometimes a little change can be good.