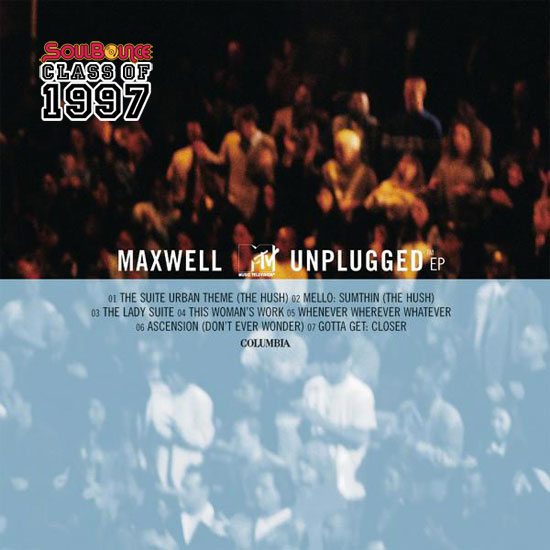 Maxwell made quite an impression when he released his debut album, Maxwell's Urban Hang Suite, in 1996. From his music to his remixes to his visuals to his look, he had us all in. It was when he embarked on his first headlining tour the following year that he got audiences really open, though. The dynamic performer with the wild, curly fro commanded the stage and sounded even better than he looked. His music came alive and so did he. If you were around back then and had the opportunity to see him in concert, then you already know. However, if you missed the Urban Hang Suite Tour, then Maxwell and MTV brought a low-key live experience to the small screen with his episode of MTV Unplugged and the resulting live EP.

MTV's long-running concert series famously showcased artists performing acoustic numbers, both originals and covers, in an intimate setting in front of a live studio audience. For Maxwell's MTV Unplugged, he followed the same formula. Max began his set with "The Suite Urban Theme (The Hush)," an extended refix of Urban Hang Suite's "The Urban Theme" complete with vocals. That set the mellow smooth tone for Maxwell to shine and show off on "Mello: Sumthin (The Hush)," "The Lady Suite," "Whenever Wherever Whatever" and "Ascension (Don't Ever Wonder)." The beauty of this performance is that he didn't just sing straight-ahead album versions of his songs. Instead, Maxwell and his excellent band and background singers put some extra seasoning and sauce on tracks fans already knew and loved.

Recorded at the Brooklyn Academy of Music a couple weeks before his 24th birthday, Maxwell debuted a new cornrowed hairstyle and new music with two stunning live covers. The first, a cover of Kate Bush's "This Woman's Work," found him putting a masculine spin on her song inspired by childbirth and flexing his upper register. Maxwell's version of "This Woman's Work" has gone on to become a staple in his repertoire. He ended his MTV Unplugged performance with a surprising rendition of Nine Inch Nails' "Closer" entitled "Gotta Get: Closer." Max transformed the creepy industrial rock song about self-hatred and obsession into a rousing gospel-like jam session. The original and Maxwell's take on it are as different as night and day.

Maxwell's MTV Unplugged EP followed MTV Unplugged recordings from the likes of Mariah Carey and the Uptown Records roster of artists, both released years before, and holds the distinction of being the only release by a neo soul artist from the series. The EP peaked at No. 53 on the Billboard 200 and hit No. 15 on the R&B Albums chart. Although Maxwell's episode of MTV Unplugged hasn't aired on the channel in forever and is tucked away on grainy VHS tapes around the globe, the EP lives on as a snapshot of the stylish, soulful artist early in his career.