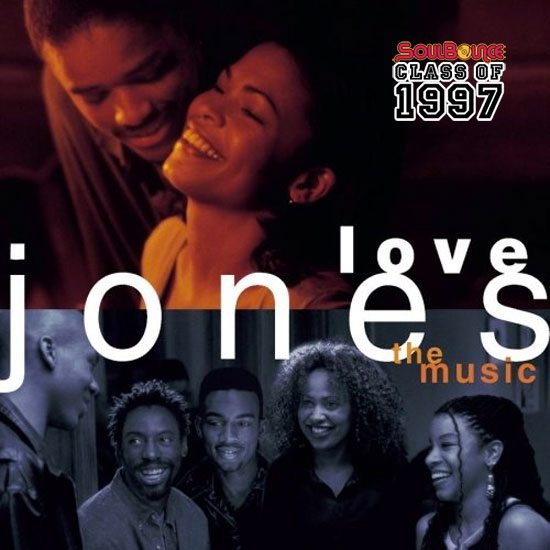 Though movie soundtracks existed before and after the '90s, somehow that decade was the only one that seemed to consistently get them right. One (or two...or three) always manages to pop up whenever we drop our "Class Of" series and this year is no exception. And, really, how could we not include something as amazing as the soundtrack for the seminal '90s romantic drama Love Jones? Love Jones The Music perfectly encapsulated the spirit of the film and also served as a time capsule for the then-burgeoning genre of neo-soul.

Though the film wasn't released until March of 1997, it was the music of the soundtrack that actually heralded its arrival. Maxwell's Urban Hang Suite single "Sumthin' Sumthin'" was already a favorite, but it was retooled and reimagined as "Sumthin' Sumthin' (Mellosmoothe)" — a slow, sensual, bedroom-ready cut that took the song to the next level — and cut through the chill of its winter release to warm us up for the coming spring. This version of the song got heavy airplay on quiet storm radio, which helped the single peak at No. 23 on Billboard's Hot R&B Singles chart. Then there was Lauryn Hill and the Refugee Camp All-Stars delivering the surprisingly tender, acoustic guitar-driven ballad "The Sweetest Thing," which showed Lauryn in a much different light than her rhyme-spitting L-Boogie persona that had helped lead Fugees to towering success the previous year.  The slightly melancholy melody of the song struck a chord, pushing the subdued single to a No. 61 bow on the Radio Songs chart. The album also included what was essentially the film's theme, Dionne Farris' optimistic "Hopeless." Co-written with a then-unknown Van Hunt, the song captured the on-again, off-again struggle between the film's star-crossed lovers while providing a smooth, soulful and slightly upbeat melody to help aid in the story. It resonated with not just the film's audience, becoming one of Farris' best-known tunes and peaking at No. 3 on the Hot Adult R&B Airplay chart.

However, the singles were only a glimpse into what made Love Jones The Music not only a stellar soundtrack, but one of the best R&B albums of the decade. It successfully combined established artists like Cassandra Wilson ("You Move Me"), Meshell Ndegeocello (who collaborated with Marcus Miller for the seductive "Rush Over") and Xscape ("In The Rain") with new artists like Trina Broussard (who debuts here with an underrated cover of Minnie Riperton's "Inside My Love") and even classic jazz cuts like Duke Ellington and John Coltrane's "In A Sentimental Mood" to create a mood that both evoked and went beyond the mood of the film. The deft selection of songs led the soundtrack to peak at No. 16 on the Billboard 200 and No. 3 on the R&B Albums charts. Oh, and of course we can't talk about Love Jones without acknowledging how it also helped spread the spoken word movement to the mainstream, for better or for worse. Though much of what came after the initial offerings hasn't passed the test of time and is often parodied, the bookending poems included here ("Brother To The Night (A Blues For Nina)" and "Lyric: I Am Looking At Music") both represent when the movement was at its best.

Twenty years later, movie soundtracks are more so just a hodgepodge of either already established hits or artists you've never heard of that labels want to force down our throats. However, putting on Love Jones The Music will always take us back to a time when movie soundtracks were much more carefully curated. And, much like the timeless film, it will always remind us of love that, while complicated, is always worth the effort.